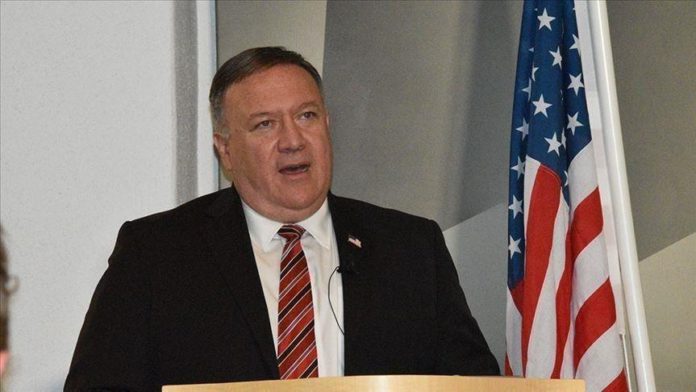 The US accused Russia on Tuesday of working to destabilize the Mediterranean region, pointing to a series of actions from Libya to Syria that it says are aimed at undermining the international order.

He made particular mention of Russia’s stalwart support for the Assad regime, and the expulsion of Russian diplomats from Greece in 2018 over charges Moscow worked to foment opposition to a bilateral agreement between Athens and North Macedonia that settled a long-running dispute, and saw the latter nation change its name.

The change of the country’s name was pivotal to its entry into NATO, which occurred earlier this year, as Greece long-opposed the move without the change. Russia’s envoys were also expelled on accusations that they were bolstering far-right groups under the guise of promoting the country’s shared Greek Orthodox heritage.

Turning to Libya, Pompeo charged Moscow with supporting renegade General Khalifa Haftar’s offensive on the capital, Tripoli, “and undermining the UN’s efforts to bring peace to the country.”

“It also continues to violate the UN arms embargo; blocked sanctions at the UN Security Council on Mohamed al-Kani, along with the Kaniyat militia, whose egregious violations of human rights are well documented; printed counterfeit Libyan dinars that have destabilized the Libyan economy; and via its proxy, Wagner, fuels the conflict,” he said.

Al-Kani is the head of the Kaniyat militia, which is sanctioned by the US over human rights abuse concerns.

Pompeo said that is but the tip of the iceberg of Russia’s actions, saying all of them “clearly demonstrate that if anyone is playing political games and trying to stall progress in regional conflicts, it is Russia, which only acts to advance its own interests to the detriment of the entire region.”