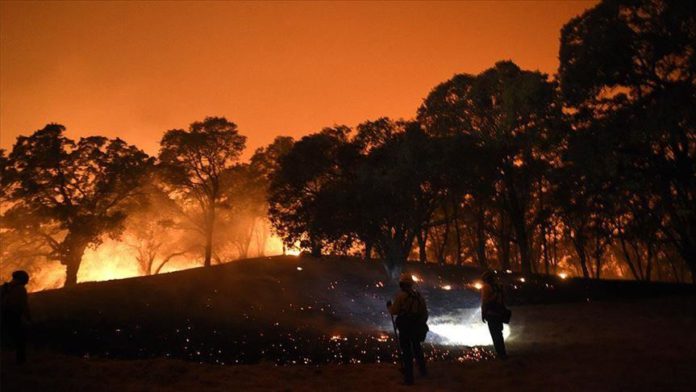 A total of 49 new initial attack wildfires have been contained in California as the western US state that lies across the Pacific Coast struggles to contain two dozen other large wildfires blazing for the past several weeks.

There are over 14,100 firefighters trying to put out wildfires across the state, said California Department of Forestry and Fire Protection, also known as Cal Fire, in a statement on Monday.

Since the beginning of the year, wildfires that rank among California’s largest on record have burned over 2 million acres in the state, leaving eight people killed and more than 3,300 structures destroyed, according to the statement.

“Northern California, including the Bay Area, and the southern mountains of Santa Barbara and Ventura Counties as well as the Eastern Sierra and Mojave Desert are expecting critical fire weather this evening,” the statement said.

“The Inland Empire down into San Diego are under a fire weather watch for critical fire weather expected Tuesday into Wednesday,” it added.

Newson on Aug. 18 declared a statewide emergency due to the fires and extreme weather conditions.

Since taking office in January 2019, Newson has spent around $500 million to expand the capacity of Cal Fire, which has an annual budget of more than $2 billion out of California’s total state spending of $208.9 billion for the 2019-2020 fiscal year.

Despite having the largest amount of gross domestic product (GDP) with nearly $3.2 billion among the US states in 2019, California is short on budget and staff to cover its 33 million acres of forests and another 15 million acres of grassland.

Total cost of wildfires is estimated to be more than $800 million so far this year, according to the US’ National Interagency Fire Center, dwarfing $163 million of fire suppression costs in 2019.

California witnessed a spree of fires in August with more than 12,000 lightning strike that caused widespread blazes, while some experts blame extreme weather conditions and climate change.

Temperatures rose about 1.8 degrees Fahrenheit (1 degree Celsius) in California while precipitation dropped 30% since 1980, according to a research led by California-based Stanford University, which noted that this doubled the number of autumn days, when extreme conditions and risk of wildfires are at the highest level.