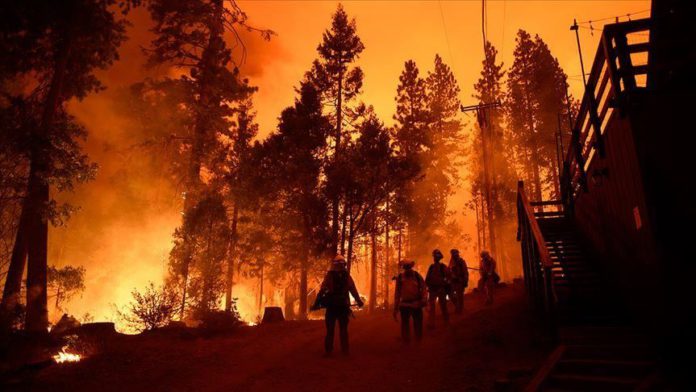 Three people died while 1,200 residents were evacuated in northern California as wildfires continue to blaze the western US state and its neighbors to the north.

“Since August 15, when California’s fire activity elevated, there have been 26 fatalities and over 7,000 structures destroyed,” California Department of Forestry and Fire Protection, also known as Cal Fire, said in a statement.

The agency said there have been more than 8,100 wildfires since the beginning of 2020, while an excess of 3.7 million acres burned in the state that has 27 major wildfires with over 18,000 firefighters on the front lines Monday.

“New wildfires have exploded in Northern California over the weekend. This historic wildfire season isn’t close to being over,” California Senator Kamala Harris, who is also the Democratic vice presidential nominee for the 2020 election, said on Twitter.

In the state of Oregon, California’s northern neighbor, Governor Kate Brown said she is implementing an eviction moratorium through Dec. 31.

She added that Canada and Mexico have sent more than 300 firefighters to help residents of her state, which has been fighting wildfires since the beginning of September.

The US’ Internal Revenue Service announced Sept. 17 it sent letters to more than 130,000 people across Oregon who are eligible to receive stimulus checks under the Economic Impact Payment.

In the US’ most northwestern state of Washington, Governor Jay Inslee said Saturday that public lands “are threatened by the climate crisis.”

Climate change and extreme weather conditions are believed to be the cause of 12,000 lightning strikes in August, combined with hot and dry weather and strong winds, which led to widespread blazes across California, Oregon and Washington, according to some experts.

The northern hemisphere recorded its hottest meteorological summer from June through August, according to the US National Oceanic and Atmospheric Administration (NOAA).

While the 10 warmest months in August have all occurred since 1998, five happened since 2015, according to NOAA.