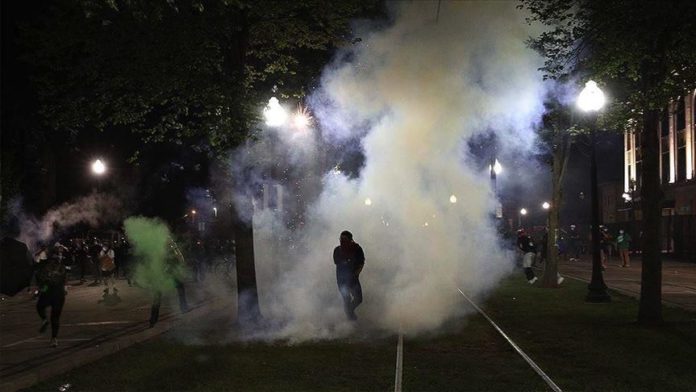 Two people were shot dead and one injured in the Midwestern US state of Wisconsin late Tuesday as protests against the police shooting of a Black man turned violent, said local police.

Police in the city of Kenosha said in a statement Wednesday that they responded to report of shots being fired and multiple gunshot victims around 11.45 p.m. (0445GMT). It said a third gunshot victim was taken to a hospital with “serious but non-life threatening injuries.”

Saying the investigation is ongoing, the department did not provide further information about the shooters or the victims.

Julio Rosas, a journalist at the scene, shared video footage on Twitter showing a man tripping and falling to the ground before firing multiple rifle rounds into a crowd.

Separately, some protestors confronted the police and National Guard and tried to push down the barricades in front of the Kenosha County Courthouse on the third consecutive night of protests.

The move comes after Jacob Blake was shot in the back seven times in an incident that has triggered widespread outrage and made Kenosha the latest flashpoint of the US’ continued struggle with racial injustice and police shootings of African-Americans.

Blake’s father, who has the same name, said Tuesday that his son is paralyzed from the waist down.

Sunday’s shooting occurred as police were responding to a “domestic incident,” the Kenosha Police Department said in a statement.

A graphic bystander video that emerged on social media appears to show Blake being shot multiple times after he opens the door to a car and attempts to enter.

The video appears to show Blake walking away from police as they attempt to apprehend him with guns drawn. They open fire after Blake, who appears unarmed, opened the door and began to enter with his back facing the two officers.

The Wisconsin Justice Department is investigating Blake’s shooting, and the officers involved have been placed on administrative leave.

US top diplomat heading to Ukraine amid Russia tensions