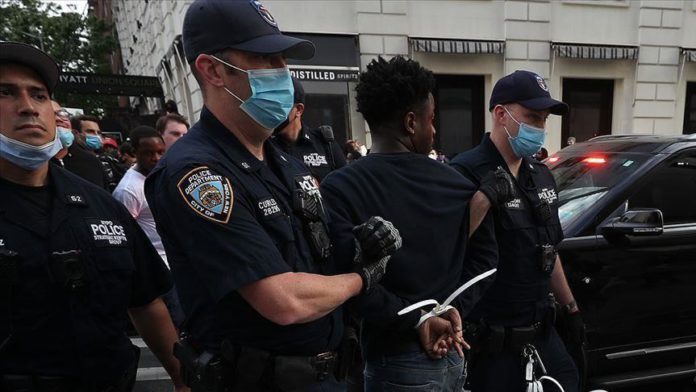 Over a dozen people were taken into custody overnight after a fire was set to a Portland Police Association Office during mass protests, police announced Friday.

In all, 14 people were taken into custody on Friday night after protesters set fire to part of the building, “vandalized property, and blocked vehicular traffic,” Portland police said in a statement.

The mass gathering began at a nearby park from where protesters marched to the association building, during which time “some group members were seen vandalizing property by tagging it with spray paint,” the department said.

“At 9:30 p.m., all persons were told over loud speaker that there was criminal activity occurring in the crowd and to not vandalize the building or attempt to light it on fire. Failure to adhere to the order would subject people to arrest, citation, or the use of crowd control agents including, but not limited to, impact weapons and/or” pepper spray agents, the department said, but said none were deployed.

Police then declared an unlawful assembly, and ordered people to vacate the area, but most ignored the directive, which was issued over loud speakers, according to police.

Portland, Oregon’s largest city, has been a flashpoint city for demonstrations against racial injustice and police brutality.

It has seen four months of sustained protests following the May 25 death of George Floyd, a Black man who died after a police officer pinned his neck to the ground for minutes on end.