TurkishPress
Home News US: 1 in 5 Americans lost someone close to COVID-19 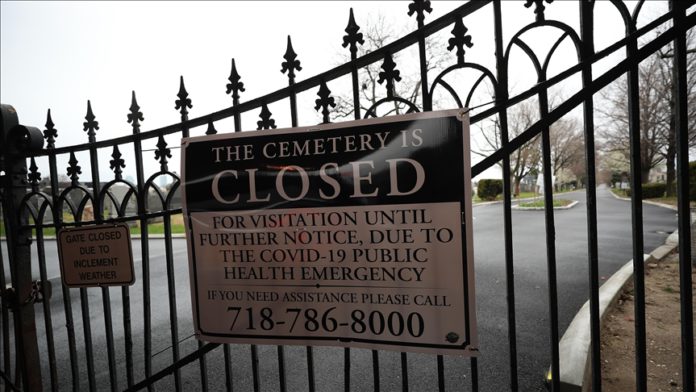 New nationwide polling shows 19% of Americans, about one in five, have a close friend or loved one who was killed by the coronavirus.

Nettie Parks of Volusia County, Florida lost her only brother to the virus last April. She told The Associated Press that she and her five sisters have yet to hold a memorial service because of travel restrictions.

“We didn’t have a chance to grieve. It’s almost like it happened yesterday,” she said. “It’s still fresh.”

More than 530,000 Americans have died from the coronavirus or complications since the World Health Organization declared it a global pandemic on March 11, 2020, according to data compiled by Johns Hopkins University. Nearly 30 million in the US have been infected.

The new poll from the Associated Press-National Opinion Research Center (AP-NORC) found that while most Americans are long past the initial shock and fear of the virus they are not quite ready to open the doors to “normalcy”.

In March 2020, the AP-NORC poll showed 50% of Americans were “extremely or very worried” about the virus. Today that number stands at around 31%.

Still, the latest poll shows 67% of Americans are at least “somewhat” worried that they or a member of their household will catch the virus, and about that same percentage always wears a mask outside the home, and want others to do the same.

The polling also finds more Democrats than Republicans are still “very” worried about the virus, 42% to 18%. And more Republicans than Democrats feel they do not need to get a vaccine, 29% to 12%.

All virus-related restrictions in the state, including mask mandates, are now gone, leading to a fierce debate about whether Texas has gone too far, too soon.

The liberal capital city of Austin continues to enforce a mask mandate, and this week, the state’s attorney general threatened to sue Austin officials to dump it.

Most states saw a dramatic decline in cases during February, but in some places that drop has leveled off, or in a few states, gone back up. On Wednesday, the state of Michigan, which has consistently maintained fairly tight restrictions, reported its highest number of new cases since mid-January.

The biggest winner in the poll might be US President Joe Biden.

Two-thirds of Americans say the nation has not taken the virus seriously enough, which Biden made his top priority as a presidential candidate.

Former President Donald Trump was roundly criticized for his response to the pandemic with even his campaign manager saying Trump’s response cost him the 2020 election.

But for Biden, the new poll shows he gets 70% approval from Democrats on his handling of the virus, and 44% from Republicans, his highest approval rating from both parties on any issue in his presidency.

Turkish stocks up 0.50% at midweek's open