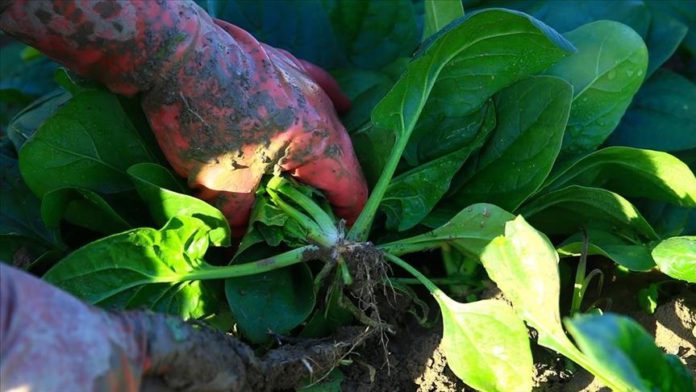 Furrows of spinach vegetables standing out side by side with tomato plants spread out on a patch of land where 39-year-old Marylin Nhika has formed a garden over the past five years at her urban home in Harare, the Zimbabwean capital.

Even when there are lockdowns in place to curb the coronavirus’s spread, Nhika’s customers bang on her gate, insisting on buying vegetables.

That has meant booming business for the married mother of three, who has never been formally employed 12 years after graduating with a degree in social work from the country’s Midlands State University.

For many educated citizens in Zimbabwe, like Nhika, joblessness is not a new phenomenon.

More than 90% are unemployed in the country, according to Zimbabwe’s Congress of Trade Unions.

Nhika, like many entrepreneurial Zimbabweans, has over the years found a way to overcome her situation.

“I’ve had to switch to market gardening, which has helped me sustain myself and my family. Even my husband has found that this is beneficial to us as a family, and he assists me around when he comes home,” Nhika, who resides in Bloomingdale, a middle-income Harare suburb, told Anadolu Agency.

She says that on a good day, she earns $30 to $35, which has enabled her to pay the school fees for the couple’s children.

Dayton Nhika, her 44-year-old husband, works as a bus conductor and admits to making very little money. He expressed gratitude to his wife for her support to the family through market gardening.

“I earn just $80 per month, which means my wage can’t cover the rent for the house we live in as a family. It’s my wife who is playing the magic to ensure that we have enough money at the end of the month to pay our rent through the garden she runs,” Dayton told Anadolu Agency.

For many other poor urban dwellers in Harare’s eastern Mabvuku poor-income suburb, market gardening has made sure that they have enough to eat even without formal jobs.

“At least with our garden, we have made sure we have something to eat as a family. We grow here vegetables, potatoes, green mealies, and tomatoes, which have been added to our diet. Even if nobody in this family working, our garden has enabled us to feed ourselves and even sell the surplus,” Mirirai Choga, a 62-year-old widow living with her four children and three grandchildren, told Anadolu Agency.

Sure, to Choga’s sentiments, market gardening has proved to be the panacea to the country’s economically hamstrung urban dwellers who have had to turn to the soil for survival.

“Market gardening is a great source of nutrition for many citizens who want to supplement their food and income. Market gardening thrives even on very small plots, allowing a significant number of people to involve with it without requiring a lot of capital,” Precious Shumba, the director of the Harare Residents Trust (HRT), told Anadolu Agency.

The HRT is a residents body that mainly covers the Harare metropolitan province, representing the interests of citizens to claim and demand their rights.

Yet, it is not a mere pleasure to work with the soil that has pushed the country’s urban dwellers to do something with vacant pieces of land in the vicinity of their homes, according to Shumba.

“From a political economy perspective, this phenomenon is driven by high levels of unemployment, lack of economic opportunities, especially for women and youth, and exclusion from mainstream economic development activities due to unfriendly socioeconomic factors,” she said.

Even without constant running water for their gardens, Zimbabwe’s urban dwellers, like Nhika and Choga, have had to rely on well water to sustain their thriving gardens.

In Mabvuku, for instance, where Choga lives, running water has long since stopped due to broken down water pipes that have gone unnoticed by city authorities.

“We have for years depended on well water or water we fetch from streams, which we also use in our gardens and that has worked well particularly for me and my family,” said Choga.

While urban dwellers appear to have found a lifeline in market gardening, the country’s laws have stood in the way of their survival strategy.

So even environmentalists, like Happison Chikova, believe that market gardening has no place in the country’s town and cities.

“Those same gardens that earn money for poor urban dwellers also earn siltation for the urban water bodies and help to perpetuate poverty for the same people doing the gardens, for there is no way they would continue to operate those gardens without water supplies from the dams they help fill up with sand,” Chikova told Anadolu Agency.

However, while many environmentalists, such as Chikova, are concerned about Zimbabwe’s urban market gardens, others, such as Nhika and Choga, are adamant that the gardens have kept them out of poverty.

“Without this garden, my family and I would have long abandoned city life and gone back to the village, where poverty certainly wouldn’t have spared us. I’m using just a small piece of land here and it’s bringing me good returns,” said Nhika.

Choga, on the other hand, has vowed to never give up her market gardening venture.

“It won’t make sense for me to stop working on my garden here, where I’m making more than most of the people who claim to be employed. I make roughly $150 a month selling products from my garden, and that has kept me and my family afloat for years,” Choga said.