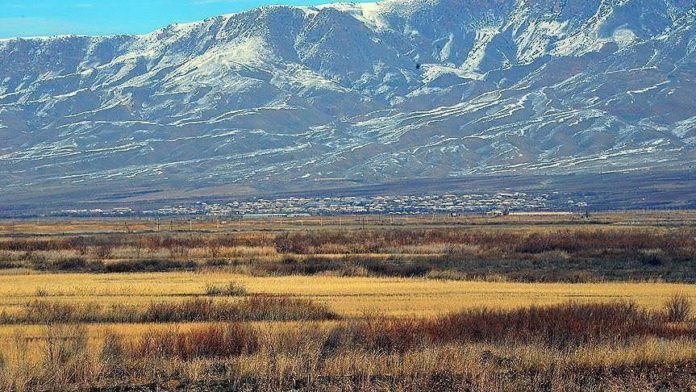 The OSCE Minsk Group, formed to solve the Armenia-Azerbaijan Upper Karabakh conflict, could not produce a solution during the 28-year negotiation process.

The OSCE Minsk Group was formed in 1992 to find a peaceful solution to the crisis that began with the Armenian invasion of Upper Karabakh, also known as Nagorno-Karabakh, an internationally recognized territory of Azerbaijan.

The presidents of France, Russia, and the US on Thursday called on Armenia and Azerbaijan to immediately cease hostilities in their conflict over the Nagorno-Karabakh region that flared up earlier this week.

Emmanuel Macron, Vladimir Putin, and Donald Trump said in a joint statement the leaders of Armenia and Azerbaijan must resume peaceful negotiations.

“We also call on the leaders of Armenia and Azerbaijan to resume negotiations on settlement in good faith and without preconditions, with the assistance of the OSCE Minsk group co-chairs.”

The Minsk Group, which could not achieve concrete results for the solution of the Upper Karabakh conflict despite many initiatives since its formation, has only been known for organizing the meetings of the Azerbaijani and Armenian presidents and foreign ministers.

Azerbaijani President Ilham Aliyev over the years many times criticized the ineffectiveness of the Minsk Group at every opportunity and expressed that his country expected more concrete efforts.

As President Aliyev pointed out, the neutrality of the US, France, and Russia, who took part in the process, was also frequently criticized.

The “Minsk trio” wants to preserve the status quo to “dictate” its national interests in the region rather than to offer a peaceful solution to conflicts in line with international law.

While Russia was criticized for its steps to strengthen its hegemony in the region and protect its national interests at its borders by participating in the negotiation process, it aims not to allow any international institution or state to block its interests in the region.

Russia’s efforts to launch unilateral mediation initiatives in Moscow under its own auspices stood as a clear example of this goal.

On the other hand, Russian arms sales to both Armenia and Azerbaijan since Armenia’s initiation of the conflict in Upper Karabakh, also gives clues about Moscow’s approach to the process.

Meanwhile, the US hopes to improve the scope of its economic and political interests in the region, especially by expanding its control over energy and shipping routes.

On the other hand, claiming that it looks after the interests of the EU, France wants to get a share from the “economic pie” in the region.

The Armenian diaspora within the countries of the Minsk trio, continues to harm the principle of neutrality, one of the critical elements in the group’s approach to the process.

These lobbies were trying to make the issue a matter of domestic politics in countries such as Russia, France, and the US, and thus, the Minsk Group mostly took sides with the Yerevan administration in the Upper Karabakh conflict.

For instance, Russia especially provided military equipment support to Armenia for the occupation of Upper Karabakh, and Russian army units were directly involved in the Khojaly Genocide on Feb.26, 1992.

During the two-hour Armenian offensive, 613 Azerbaijani citizens, including 106 women, 63 children, and 70 elderly people were killed, and 487 others critically injured, according to Azerbaijani statistics. Eight families were completely wiped out, while 130 children lost one parent and 25 children lost both parents.

Armenia’s membership to the Collective Security Treaty Organization (CSTO) stands out as another factor affecting the process.

While the CSTO, which can be considered as “Russia’s NATO”, aims to protect Russia’s interests in the region after the collapse of the Soviet Union, the presence of Russia’s two military bases in Armenia means that the Armenian and Russian armies frequently act in coordination.

Also, the “security” of Armenian border region with Turkey and Azerbaijan continues to be provided by the Russian army troops.

International mediation mechanisms are today one of the most effective methods for resolving various conflicts. However, the principle of neutrality is considered as the most critical feature that should be considered in order for these mechanisms to succeed in solving problems.

The Minsk Group has not been willing to take the necessary steps to solve the problem between Armenia and Azerbaijan, especially the neutral approach, for almost 30 years, while the benefits of the Minsk trio from the deadlock continue being a target of criticism.

During the Upper Karabakh conflict, over 1 million Azerbaijanis became internally displaced persons, while 20,000 were martyred in military operations and 50,000 were wounded and became disabled, according to Azerbaijan’s official figures.