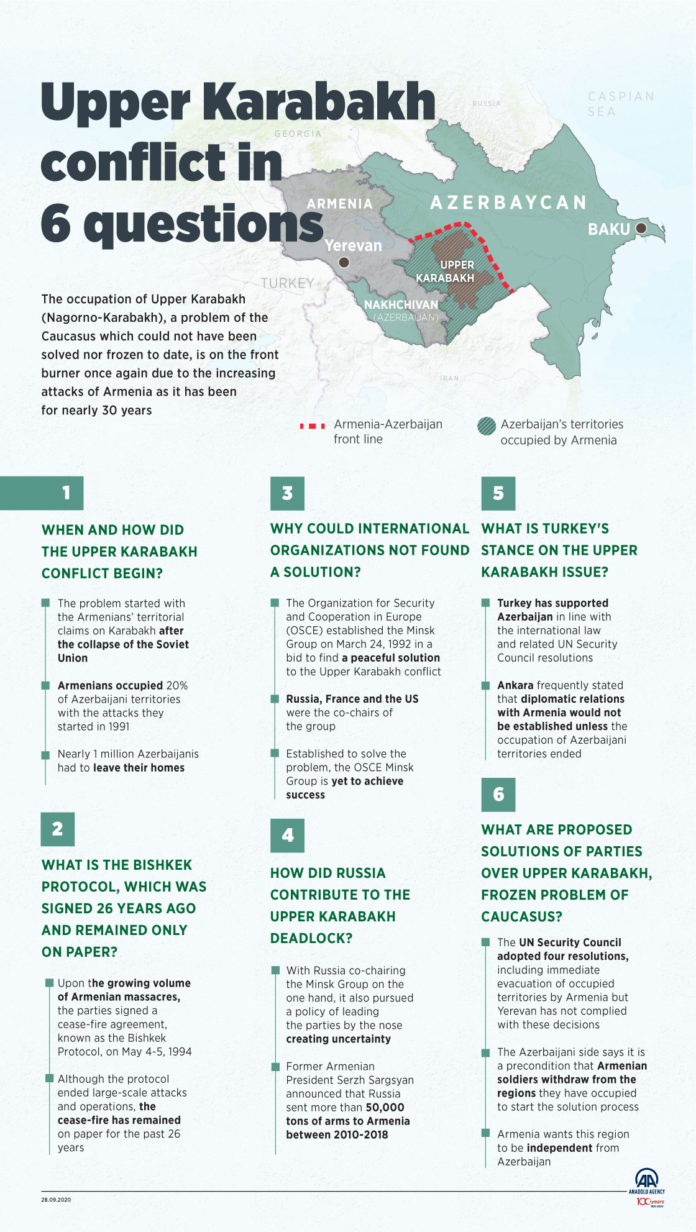 The illegal occupation of Upper Karabakh, also known as Nagorno-Karabakh, a burning issue at the heart of the Caucasus for the last 30 years, is once again on the agenda due to increasing attacks by Armenia.

The provocations by Yerevan were an attempt to distract attention from social and economic problems faced by the country.

Azerbaijan, however, wants its lands returned.

Here, the dispute is explained in six points.

1- When and how did the Upper Karabakh conflict begin?

The origin of the conflict goes back to the beginning of the 20th century. During the Soviet era, premier Joseph Stalin decided to create an Armenian autonomous region in Upper Karabakh within the borders of Azerbaijan. For this, he settled many Armenians from different regions here. This policy of the Russians started to bear bloody results in the late 90s.

When the Soviet Union started to weaken, Armenians demanded the transfer of Karabakh from Soviet Azerbaijan to Soviet Armenia. The disagreements between the two communities turned into conflict, and into a large-scale war in the early 1990s.

Armenians, who had the support of the Russians, occupied Khankendi in 1991 and Shusha and Khojaly in 1992.

The Armenians, who later captured Lachin, Khojavend, Kalbajar and Agdara, entered Agdam in 1993. Agdam was followed by the occupation of Jabrayil, Fuzuli, Qubadli and Zangilan provinces. Armenians committed massacres against Azerbaijani Turks during this period. Some 20% of Azerbaijani territories were occupied, and nearly one million Azerbaijanis were forced to leave their regions.

2- What is the Bishkek Protocol which was signed 26 years ago and remained only on paper?

Upon the increase in Armenian massacres, the parties signed a cease-fire agreement, known as the Bishkek Protocol, after a meeting with the initiative of the Interparliamentary Assembly of Member Nations of the Commonwealth of Independent States, the Parliament of the Kyrgyz Republic, the Federal Assembly of Russia and the Ministry of Foreign Affairs in Bishkek on May 4-5, 1994.

With the protocol signed at the level of representatives of the Parliament, it was agreed that as of May 12, 1994, the parties would declare a cease-fire and not organize a mutual attack, the withdrawal of forces from the “captured territories”, re-opening of the infrastructure and return of refugees, and the signing of a binding agreement.

The copy of the document brought to Baku was signed on May 8 after some changes were made by the then speaker of the parliament. At the insistence of the Azerbaijani side, the word “captured” in the text was replaced with the word “occupied”.

According to the protocol, a comprehensive agreement was intended in the future, but the peace agreement mentioned in the protocol could not be made due to the parties’ disagreement, despite the years.

Although large-scale attacks and operations were ended with the protocol, the cease-fire remained on paper for the past 26 years and in the conflicts, both sides lost their troops. No exact numbers of casualties are known but they are estimated to be in thousands.

3- Why did not international organizations find a solution?

The Organization for Security and Cooperation in Europe (OSCE) formed the Minsk Group on March 24, 1992 in order to encourage a peaceful solution to the Nagorno-Karabakh conflict. Russia, France and the US were co-chairs of the group. The OSCE Minsk Group, which was established to solve the problem, has not achieved results so far.

The co-chairs of the Minsk Group, who visited both countries periodically and met with the authorities, did nothing more than warning the parties to abide by the cease-fire each time.

4- How did Russia contribute to the Upper Karabakh deadlock?

While Russia was the co-chair of the Minsk Group on the one hand, it also pursued a policy of holding the parties by creating uncertainty.

Before and after the cease-fire agreement signed between Armenia and Azerbaijan in 1994, Russia’s arming of Armenia has always been on the agenda.

Former Armenian President Serzh Sargsyan, who made a press statement on Aug. 19 after the Tovuz attacks in July this year, announced that Russia sent more than 50,000 tons of weapons to Armenia between 2010-2018. With the loan agreement signed between the two countries in 2015, Russia allocated a $200 million loan to Armenia to buy weapons, and within the framework of this loan, Armenia bought weapons from Russia at the domestic market price. In the 4-day clash on the front line in 2016, after Azerbaijan liberated some of its strategic heights from the occupation, Russia placed Iskander-M missiles in Armenia.

Since the beginning of the crisis, Turkey has supported Azerbaijan’s stance in line with the international law and related United Nations Security Council resolutions.

Turkish officials, especially President Recep Tayyip Erdogan, have called on Armenia to end the occupation in international meetings they attended. The Ankara administration frequently stated that diplomatic relations with Armenia will not be established until the occupation of Azerbaijani territories ends.

6 – What are the proposed solutions on Upper Karabakh, the frozen problem of Caucasus?

No country or international organization recognized the occupation of Armenia for nearly 30 years and the so-called republic that it established on the territory of Azerbaijan.

During this process, the UNSC adopted four resolutions, including immediate evacuation of occupied territories by Armenia but the Yerevan administration did not comply with these decisions.

The Azerbaijani side puts forward the condition that the Armenian soldiers withdraw from the regions they occupied in order to start the solution process.

While Baku promises high-status autonomy to Upper Karabakh, Armenia wants this region to be independent from Azerbaijan.