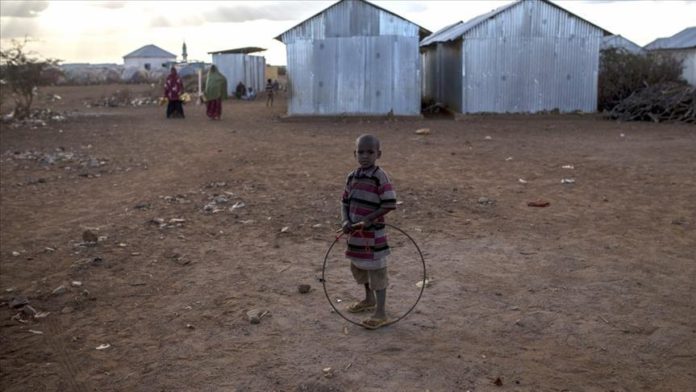 The United Nations Children’s Fund (UNICEF) on Tuesday projected that up to 20 million people in Eritrea, Ethiopia, Kenya, and Somalia will need water and food assistance in the next six months as the driest conditions in four decades afflict the region.

“UNICEF projects that up to 20 million people in Eritrea, Ethiopia, Kenya, and Somalia will need water and food assistance in the next six months,” Mohamed Malick Fall, UNICEF’s Eastern and Southern African regional director, said at a press conference.

“That is almost the same amount of people as the population of Greece and Sweden – combined,” he said in a video interview from Nairobi, Kenya.

Many of those in need are children, “who are at even greater risk due to one of the worst climate-induced emergencies of the past 40 years,” said Malick Fall.

The UNICEF official said that the region cannot cope with “yet another perfect storm,” combining COVID-19, conflict, and climate change.

He said that children pay the “biggest price” for crises not of their making.

Malick Fall said the ongoing climate-impacted emergency deprives children of having a home, a meal, a classroom, and access to life-saving health services.

“UNICEF fears this number will increase by 50% if rains do not come in the next three months,” said Malick Fall.

“In Somalia alone, an estimated 1.3 million children under five years of age are at risk of malnutrition, including around 295,000 severe cases. These figures are expected to worsen.”

The UNICEF official said that families are taking extreme measures to survive and, in many cases leaving their homes, which puts children on the move, particularly at risk.

“Many children will die if we don’t help avert previous famine situations – or suffer needlessly and with life-long cognitive or physical damage,” warned Fall.

He said UNICEF needs $123 million now for the four countries alone to cover life-saving needs for the most vulnerable till the end of June 2022, to prevent a disaster for children and their families.

At the same press conference, the World Food Program said an estimated 13 million people wake up hungry each day as the region grapples with severe drought caused by the driest condition since 1981.

Over 4.43B coronavirus vaccines jabs given worldwide