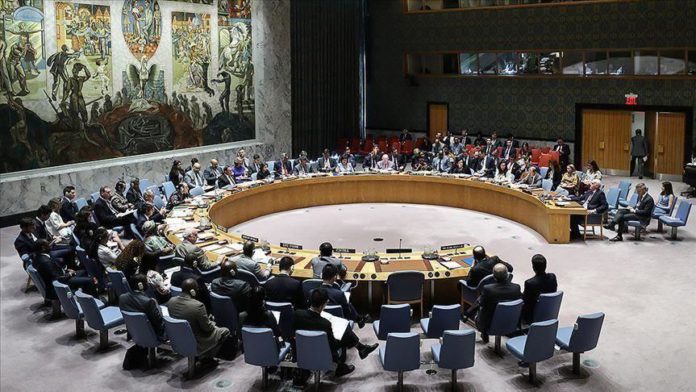 The UN Security Council voted down a Russian draft resolution Wednesday that sought to extend cross-border aid to Syria for six months through one border gate.

The bid only garnered support from China, Vietnam and South Africa plus its own vote. The US, France, UK, Germany, Belgium, Estonia and Dominican Republic voted against the draft resolution, which needed at least nine “yes” votes.

Tunisia, Niger, Indonesia and St. Vincent and the Grenadines abstained.

The Russian resolution sought to extend the cross-border mechanism for another six months and limit the number of crossing points to just Bab Al-Hawa.

On Tuesday, Russia and China vetoed a UN Security Council resolution to extend aid deliveries from Turkey to Syria.

The authorization, which has been in effect since 2014, is set to expire Friday.

The resolution was drafted by Germany and Belgium.

Under the current resolution, the UN aid is delivered from Turkey to northwestern Syria via the Bab al-Hawa and Bab al-Salam border crossings.

Moscow argues that the Bab Al-Hawa crossing could cover all of the humanitarian needs of the population in Idlib, whereas Bab Al-Salam was providing only 14% of overall aid deliveries.

However, UN officials have repeatedly said the two crossings from Turkey to Syria are “a lifeline for millions of civilians whom the UN cannot reach by other means.”

According to the UN, 70% of Idlib province’s three million residents need humanitarian assistance.

*Betul Yuruk in New York contributed to this story

May 17, 2020
We use cookies to ensure that we give you the best experience on our website. If you continue to use this site we will assume that you are happy with it.Ok