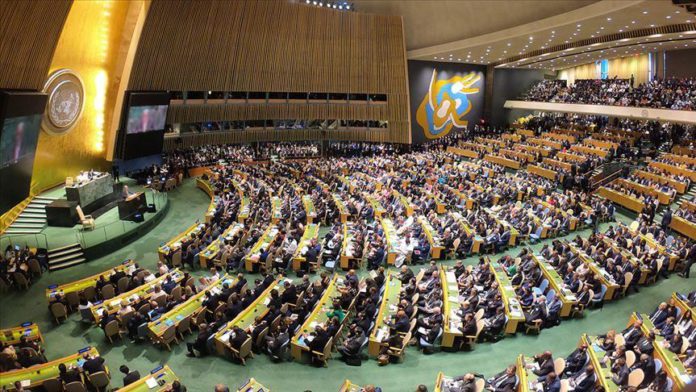 The world’s largest annual diplomatic event, the UN General Assembly (UNGA), will take place this year in an unprecedented fashion as world leaders for the first time will gather virtually due to the coronavirus pandemic.

The session will be led by Turkish Ambassador Volkan Bozkir, who officially assumed the presidency of the General Assembly on Tuesday.

In their opening remarks, Bozkir urged UN member states to uphold multilateralism to address collective challenges, and UN chief Antonio Guterres for his part said the pandemic will not halt the continuous work of the international organization on a full range of issues.

Although the virus may distract attention from other topics on the agenda, world leaders and representatives are expected to address climate change, racism, intolerance, inequality, poverty, hunger, and armed conflict while overcoming the obstacles of working virtually.

Only one representative for each UN member state will be able to attend the assembly in-person while world leaders are set to deliver pre-recorded statements that will begin to air on Sept. 22.

Despite US President Donald Trump’s earlier intention to address the General Assembly in person, the White House and the State Department this week said neither the US president nor Secretary of State Mike Pompeo would go to New York for the UNGA.

U.N. Spokesperson Stephane Dujarric also said Thursday that the organization was not expecting any head of state or government to visit New York this year.

The UN will celebrate its 75th birthday on Sept. 21 with the theme of The Future We Want, the UN We Need: Reaffirming our Collective Commitment to Multilateralism, and Secretary-General Guterres will deliver a virtual address.

The General Debate will take place on Sept. 22-29, a week of high-level speeches on global issues.

Iran, Cuba, France and Egypt will also deliver speeches Tuesday, while Iraq, Afghanistan, and Venezuela will address the assembly on Wednesday, Libya on Thursday, Palestine and Pakistan on Friday, and India on Saturday.

Israel, Saudi Arabia, and Germany will speak on Sept. 29.

A summit on biodiversity will be held on Sept. 30, a day before the 25th anniversary of the 4th World Conference on Women.

A high-level meeting to commemorate and promote the International Day for the Total Elimination of Nuclear Weapons will take place on Oct. 2.