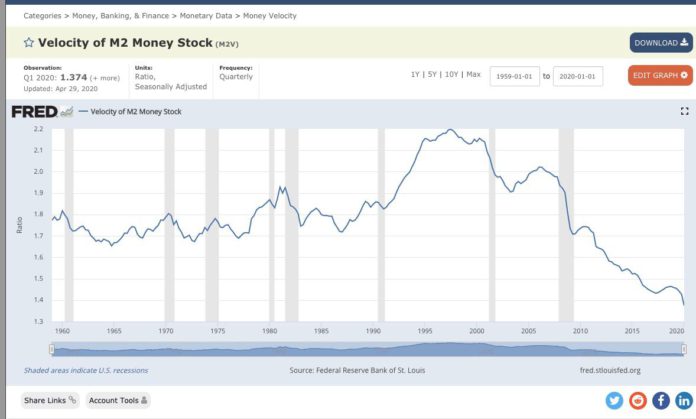 Though many countries worldwide are moving towards a post-pandemic normalization, fears remain about the toll coronavirus will take on economies in the months and years to come.

At the beginning of the crisis, some economists held the idea of a V-shaped recovery, meaning a sharp decline in the short run followed by quick retrieval.

Skeptical of this approach, Karlygash Kuralbayeva, an economist at King’s College London, suggested that it is too early to make such an assumption on the post-coronavirus economic outlook.

She argued that psychology and behavioral aspects will play an even more important role in the economic fallout of the pandemic than in the aftermath of the 2008 financial crisis.

The whole world is in lockdown, which makes this crisis different than the 2008 crisis, Kuralbayeva said.

According to her, as supply shock is turning into a demand shock, we could see a dramatic decline in the velocity of money.

The velocity of money is a measurement of the rate at which money is exchanged in an economy. It is the number of times that money moves from one entity to another.

This is the reason Kuralbayeva expects the rebound will be weaker despite huge amounts of newly printed money by central banks and rescue packages released by governments.

So once the lockdown measures are lifted, many people will not be willing to consume immediately since there will still be uncertainty about whether the deadly virus will rear its head again in a second wave.

“All this generates fear, and when people fear they’re going to change their mind, becoming more risk-averse,” she explained.

She suggested people will highly likely prepare themselves for a potential second wave of the pandemic.

Referring to a recent survey in the US, Kuralbayeva said it showed how health concerns would play an important role in people’s economic decision-making.

“When people were asked whether they would return to public places if stay at home restrictions were lifted, almost half of them said ‘no’ till the outbreak is over,” she said.

People were also asked in the survey whether they feel comfortable going to restaurants or bars or getting on an airplane, she added.

This time, Kuralbayeva noted, more than 70% answered No, showing their concerns over the coming days.

“So people’s minds have already changed,” she added.

Citing another study done in the US, she said 38% of people who got virus relief money from the government saved the money rather than spend it.

She added that 26% of them used this money to pay off debts, while, when asked about their plans, 80% said that they planned to spend it but they had not done so yet.

“So basically not a single penny has been spent so far,” Kuralbayeva added, saying that this goes back to the velocity of money concept showing how many times we spent the same amount of money in an economy.

“If people receive money given as stimulus and don’t spend it, then there’s no velocity,” she explained, adding that this is because people expect their paychecks might soon be cut 20-25%.

Pointing to a U.S. Federal Reserve chart available online, she said it also shows the velocity of money going down.

According to Kuralbayeva, considering changes in consumer behavior, officials should be alert with instant actions to jump-start economic activity and thus whom they will back up and how.

Citing an example of projections on the British economy, she said:

Yet, Kuralbayeva argued, many developed economies will be facing a sharp recession, even close to becoming a depression.

This is why she strongly advises governments to be ready for a worst-case scenario.

Central bank should not cut rates below zero

“I think major central banks around the world responded to the [current] crisis quite quickly,” Kuralbayeva said.

According to her, this is partly because some of them were criticized for not taking immediate steps to tackle the 2008 financial crisis.

She does not share the views of some economists who have praised immediate interest rate cuts.

Referring to Mohamed El-Erian, chief economic adviser at Allianz, she said she agrees with him that major central banks such as the Fed and Bank of England should not have cut interest rates to zero.

The main idea behind this is that if the banks reduce interest rates to zero now, then they will incapable of cutting rates further when needed the most.

“We can’t use cutting interest rates as the main policy instrument to deal with a crisis like this,” Kuralbayeva argued.

This is the reason why, she said, there is a lot of debate in the US and the UK over whether they should “go negative.”

“Negative interest rates can have negative effects on the banking sector, we know this very well from Japan,” she said.

What was called a “lost decade” in Japan was not just one decade, but decades of fighting deflation and passive economic activity, she said.