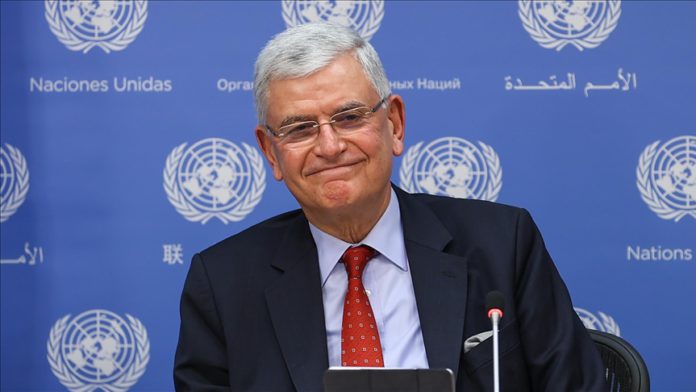 UN General Assembly President Volkan Bozkir has welcomed a renewed “agreement of cease-fire” by rival militaries of India and Pakistan along the Line of Control (LoC) in the disputed Jammu and Kashmir.

“I wholeheartedly welcome today’s ceasefire agreement between India and Pakistan,” said Bozkir on Twitter on Thursday.

“Their stated commitment to achieve sustainable peace through addressing each other’s core issues and concerns sets an example for other countries and demonstrates UNGA values,” he added.

I wholeheartedly welcome today’s ceasefire agreement between #India and #Pakistan. Their stated commitment to achieve sustainable peace through addressing each other’s core issues and concerns sets an example for other countries and demonstrates #UNGA values.

Early Thursday, in a joint statement, the two militaries announced that they will observe all cease-fire agreements along the LoC — a de facto border that divides the disputed Kashmir valley between India and Pakistan.

The statement said the heads of military operations of the two South Asian nuclear-armed neighbors held discussions via a hotline and agreed to address “each other’s core issues and concerns that have the propensity to disturb the peace and lead to violence so that sustainable peace is achieved along the borders.”

Both countries have accused each other of violating the 2003 border cease-fire agreement.

India’s Home Ministry said Pakistan violated it 5,133 times in 2020, while Pakistan accused the Indian troops of violating the agreement more than 1,600 times in the same year.

Dozens of soldiers and civilians were killed and scores injured on the two sides in these firing incidents that experts say were the highest since the signing of the border agreement in 2003.