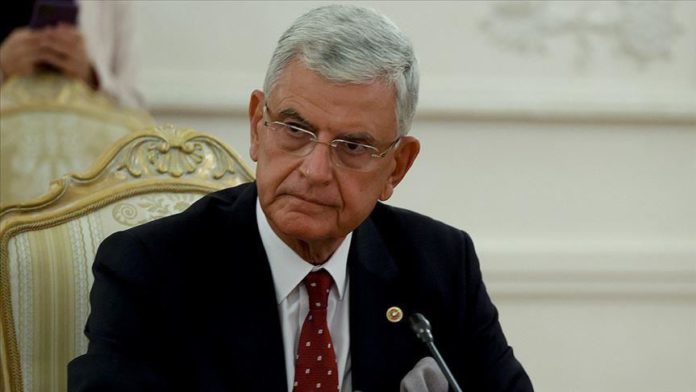 The president-elect of the UN General Assembly (UNGA) met with Pakistan’s premier in Islamabad on Monday to discuss a variety of regional, and international issues, including the lingering Kashmir dispute.

Volkan Bozkir, a former Turkish diplomat, who will assume the office as UNGA President on Sept. 15, arrived in Islamabad on Sunday evening for a two-day maiden visit.

Facilitating Bozkir on his election, Pakistan’s premier Imran Khan apprised him of the current situation in disputed Jammu and Kashmir, an issue that was on agenda of the UN Security Council for over seven decades, said a statement from the Prime Minister Office.

“The Prime Minister highlighted the dire human rights and humanitarian situation in IIOJK [Indian Illegally Occupied Jammu and Kashmir] since Aug. 5 2019, as well as the ongoing gross and systematic violations of human rights of the Kashmiri people and the attempts to change the demographic structure of the occupied territory,” the statement said referring to New Delhi’s controversial scrapping of the disputed region’s semi-autonomous status last year.

Khan, it added, stressed the UN must play its rightful role in addressing the “grave situation and ensuring that Kashmiris exercise their right to self-determination promised to them in the relevant UN Security Council resolutions.”

The two also discussed ways to mitigate the socio-economic impacts of COVID-19 pandemic, focusing on saving lives, securing livelihoods, and stimulating the economy.

Khan also highlighted his call for Global Initiative on Debt Relief and stressed the need to provide greater fiscal space to the developing countries to overcome deleterious socio-economic impacts of coronavirus pandemic.

He expressed hope that the 75th Session of the UNGA would accord priority to these issues, which affected billions around the world, the statement concluded.

“I am impressed by his [Khan’s] vision on regional, and international issues,” he added.