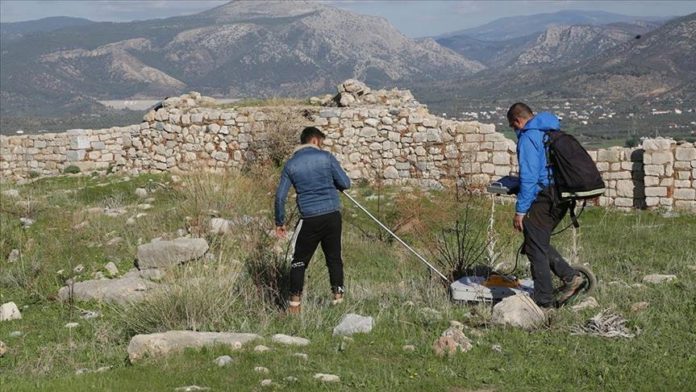 An underground radar and a drone shed light on history in Turkiye’s ancient city of Becin, which is on the UNESCO World Heritage Tentative List.

Artifacts have been unearthed during the excavations in the Becin Ancient City, which was the capital of the Menteseogullari Principality in the 13th and 14th centuries and is located in the Milas district of Turkiye’s Aegean Mugla province.

Underground radar and drones are also used in archaeological studies in the ancient city, which is one of the special places with traces of Anatolian history.

The radar helps take underground X-rays of some parts of the historical area, and the ancient city is transferred to the digital environment through the help of drones.

Kadir Pektas, the head of the excavation team and a professor at Istanbul Medeniyet University, told Anadolu Agency that they carried out an intense program through excavations, restorations, and other scientific research last year.

Stressing that they can carry out much more accurate excavation and scientific studies with the data obtained through digitization, Pektas said: “Underground radar and drone-assisted digitization studies will open new horizons in the ancient city of Becin.”

There are about 30 historical buildings in the ancient city that are built on a high plateau overlooking Mugla’s Milas Plain, Pektas noted, saying Becin is a unique place with its flora and fauna along with its cultural assets.

Iskender Dolek, an academic at Turkiye’s Mus Alparslan University, said the studies in the ancient city will also support the creation of an up-to-date database of excavations.

“We are performing 3D scanning with a drone with special software. The data to be obtained is very important for sound excavations and revealing the past and present of the ancient city. The data will guide the future of archeology studies here,” Dolek added.

'Turkey ready to cooperate with Iraq on PKK'

Turkey calls off events to stem spread of coronavirus