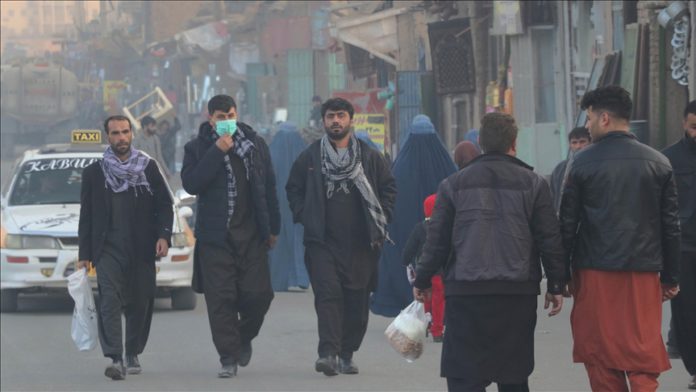 With one of the world’s youngest and fastest growing populations, Afghanistan is struggling to tap into this immense wealth as dire threats of war force many of its promising youths to flee abroad.

Panicked by advancing Taliban insurgents, huge numbers of educated young Afghans have been flocking to the main passport office in the Karta-e-Chahar neighborhood of the capital Kabul.

“I see no future here [in Afghanistan] for myself or my children,” Syed Erfan, a young government employee and father of two, told Anadolu Agency while waiting for his turn in the huge queue outside the office.

Officials at the Passport Directorate of the Ministry of Interior Affairs said the main office in Kabul has been overwhelmed with applicants since the US announced its exit strategy from Afghanistan back in May.

“Our capacity is of around 4,000 passports a day, but the applications we are receiving are much more than that,” said one of the officials, who wished not to be named as he was not authorized to speak to the media.

A glance at the queues at the passport office which stretched well beyond its compound into the nearby streets indicated the rich diversity of the multi-ethnic country, but many of the applicants seemed to be between the prime ages of 20 and 40 years.

Ahmad Shah, another applicant, was there to apply for a passport for his wife, with whom he wished to travel to Turkey.

“I have been raised by a single mother after my father got killed during the rule of the Mujahedeen,” said Ahmad, a human resource manager at a private firm in Kabul, referring to the factions of Islamic parties that were engaged in the civil war in the 1990s.
“We are frightened by the repeat of that sort of situation.”

Young Afghans such as Ahmad and Syed said they are witnessing the slipping away of the many gains of the past couple of decades of relative peace as efforts to reach a political settlement to the bloody war fail to yield results and the war steadily engulfs previously peaceful territories.

There are, however, many others who are of the opinion to stay in the country and fight for their survival and the values they stand for.
“The important thing is that whether we are alive or dead, Afghanistan is our homeland, and we will be here, refraining from migration and emigration. We hope for the prosperity and independence of our country,” tweeted one such patriotic Afghan, Habib Khan.

“I shall make you my motherland [Afghanistan] the contemporary to the world, or will turn myself into black dust at your feet,” he added.

Estimates by the country’s National Statistics and Information Authority suggest that up to 63.7% of Afghans are under 25 years of age, reflecting a steep ‘pyramid’ age structure whereby a large cohort of young people is slowly emerging.

Technically, experts believe that with proper education and job opportunities as well as good health care and empowerment, this young population could contribute to a demographic dividend: a large working-age population with few dependents, collectively bringing prosperity to their society.

‘Failure to build the state’

Observers believe that the exodus of skilled labor due to the economic and security uncertainty, as well as the pullout of the international community, will be devastating to the security forces’ morale and the civilian government’s capacity to rebuild the country after a possible settlement.

“Or maybe even just an economy that can provide enough certainty and perspectives for Afghan citizens when left to its own devices,” she said.

According to the latest edition of the Long War Journal, the Taliban has taken control of more than 80 districts in the two months since launching its offensive against the Afghan government after President Joe Biden announced the US would withdraw its forces from the country by September.

In many cases, Afghan security forces have turned over district centers, abandoned military bases, surrendered to the Taliban and handed over their weapons, vehicles and other war material without a fight. The Taliban’s multi-year strategy of gaining influence in rural districts to then pressure the population centers is also paying dividends, it said last week.

The Long War Journal’s observation suggests that the Taliban control 168 districts in Afghanistan and the Afghan government has control over 79 districts while 151 more districts remain contested.

As for the population, it said an estimated 10.9 million Afghans are living in areas under government control while 10.3 million are in areas under the Taliban and 11.6 million reside in restive and contested areas.