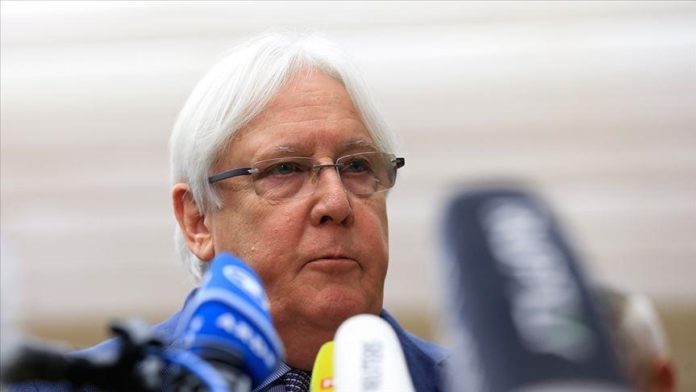 Yemen’s conflict between Iran-backed Houthi rebels and government forces is in the midst of a “dramatic” deterioration, the UN’s special envoy said on Tuesday.

Martin Griffiths told the Security Council the Houthi offensive on the government-held city of Marib is imperiling Yemenis, including about 1 million who took refuge there after fleeing conflict elsewhere.

Meanwhile, a blockade on fuel imports at the port of Hudaydah since January has led to widespread shortages in Houthi-controlled areas and “has contributed to the increase in cost of basic commodities, puts hospitals and services at risk,” Griffiths said.

“Even as the conflict intensifies acute fuel shortages for civilians persist in Sana’a and the surrounding governorates,” said Griffiths, further imploring the government to immediately allow in fuel shipments.

There are 13 fuel ships waiting off the coast of Hudaydah, the port in which roughly half of Yemen’s fuel imports normally flow, and the UN’s humanitarian aid chief, Mark Lowcock, said they have enough supplies to last two months.

“On average, those ships have been waiting more than 80 days for government clearance. All of them, by the way, have been inspected and cleared by the UN verification and inspection mechanism,” he said.

“The consequences of this, as always in Yemen, are not borne by those making the decisions. The consequences are borne by ordinary Yemenis, and this again contributes to their protracted crisis and prolonged starvation,” he added.

Yemen has been beset by violence and chaos since 2014, when Houthis overran much of the country, including the capital, Sana’a. The crisis escalated in 2015 when the Saudi-led military coalition launched a devastating air campaign aimed at rolling back Houthi territorial gains.

Tens of thousands of Yemenis, including civilians, are believed to have been killed in the conflict, which has led to what the UN says is the world’s worst humanitarian crisis as millions remain at risk of starvation.

Amid tensions with Russia, Japan considers supplying LNG to Europe