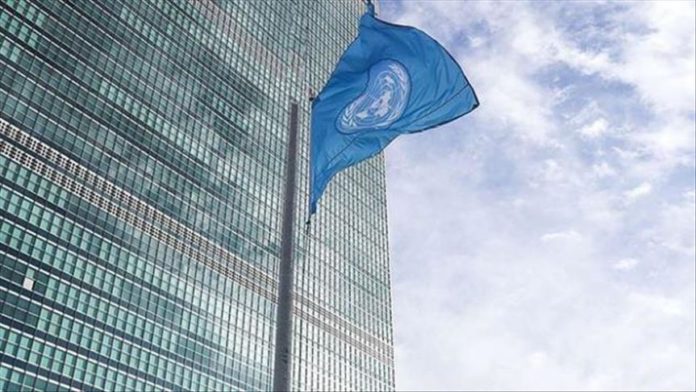 The UN has expressed concern over human rights violations and armed clashes in Myanmar and is urging the Aung San Suu Kyi administration to immediately take steps to restore peace in the country.

“Myanmar continued to witness intensified armed clashes between the Tatmadaw [Myanmar army] and ethnic armed organizations, particularly in the states of Rakhine, Chin, Shan, Kachin and Kayin,” the Office of the United Nations

The report is set to be discussed at the 45th regular session of the UN Human Rights Council scheduled on Sept. 14 to Oct. 6 at the UN office in Geneva.

The report was prepared on the basis of primary and secondary information collected from various sources, including primary witness testimonies.

It expresses concerns over continuing civilian casualties due to armed clashes.

“The Tatmadaw did not heed the call of the Secretary-General of the United Nations for a global ceasefire and instead, on 26 June 2020, launched another clearance operation, in Rathedaung township, forcibly displacing thousands of civilians.”

The report also records in detail violations in other states in Myanmar.

“Since 2019, fighting between the Tatmadaw and the Arakan Army [armed Buddhist rebels] in Rakhine and Chin states has intensified in scale and ferocity, resulting in deaths and injuries and the destruction of civilian property and other civilian objects.”

Concerns over attacks on civilians

The report accused Myanmar’s army of launching crackdowns on civilians even in places where no presence of the Arakan Army was reported.

“It appears that the Arakan Army was not active or present in the areas where these attacks took place and no armed clashes were reported to have been ongoing at that time,” it added.

It records that on April 7, 2020, Myanmar fighter jets carried out an airstrike in Chin state, “killing seven civilians and wounding six women and one child.”

“Eight houses and a rice mill were destroyed and the villagers were forced to flee.”

During the first five months of 2020, at least 137 civilians, including 25 members of the Rohingya minority, were reportedly killed and 386 wounded, including 44 Rohingya, in the Rakhine and Chin states, according to the report.

“On 29 February 2020, a Tatmadaw convoy opened fire on a village in Mrauk-U township, killing six Rohingya and wounding another six,” the report said.

Citing eyewitnesses, it added that the Tatmadaw fired indiscriminately on the village for over an hour after a vehicle in their convoy was damaged by a mine explosion.

“Schools, religious sites and civilian homes have been targeted in attacks and damaged by heavy artillery or by Tatmadaw patrols,” the report said, adding that at least 17 schoolchildren were wounded when a mortar shell hit a primary school in Buthidaung township on Feb. 13, 2020.

The report also decried a brutal crackdowns on civilians in the townships of Kyauktaw, Minbya, Paletwa and Kyauk Seik.

“In some cases, the Tatmadaw have rounded up the entire male populations of villages, often blindfolding them, before transferring them to unknown locations,” it said.

The report emphasizes restoring peace and urges Myanmar’s government to “immediately extend the ceasefire throughout the whole country and end violations.”

As part of a conducive peace process, it also recommends doing “prompt, independent, impartial and thorough investigations into all allegations of violations” including “war crimes and crimes against humanity in Rakhine and Chin states” and ensuring that “perpetrators are brought to justice through transparent and credible processes.”

The report also asks the Suu Kyi administration to acknowledge that “sexual crimes” have occurred in Rakhine state and other parts of the country and to “take concrete measures to identify perpetrators and hold them accountable and ensure health-care and psychosocial services for survivors.”

On the one-sided upcoming general election in Myanmar set for this November, the report urges officials to ensure an environment for holding a fair and participatory election.

It points to the deprivation of minority Rohingya people in their home country and recommends amending the controversial 1928 Citizenship Law to remove “links between ethnicity and citizenship and restore the citizenship of the Rohingya.”

It also recommends ensuring an independent media and civil society and cooperating and engaging “meaningfully with the newly appointed [UN] Special Rapporteur on the situation of human rights in Myanmar and relevant international justice and accountability mechanisms.”

Referring to a recent joint statement by eight countries including the US and UK, the statement said, using an older name for Myanmar: “Burma has a long history of discussing how to improve its human rights and democratic issues with the international community and for just as long has managed to do the exact opposite of what is recommended.”

“The country is failing as a democracy, is subjecting its citizens to brutal military operations, is continuing to deny its past atrocities despite its own soldiers now speaking out about them and has no viable path for equitable repatriation for the Rohingya,” said BHRN Executive Director Kyaw Win.

Speaking to Anadolu Agency, he added: “Burma has a long history of buying time and not doing anything. Burma has completely disregarded the call of the UN secretary general to cease fighting during the COVID-19 pandemic.

Therefore, it is time for Burma to face consequences.”

“The use of targeted sanctions should be increased for the country’s failures.

“Companies with connections to the government or military should also be considered for new sanctions until Burma demonstrates a serious effort to address its horrendous human rights violations and prevents them from recurring,” it added.

According to Amnesty International, more than 750,000 Rohingya refugees, mostly women and children, fled Myanmar and crossed into Bangladesh after Myanmar forces launched a crackdown on the minority Muslim community in August 2017, pushing their numbers in Bangladesh above 1.2 million.

More than 34,000 Rohingya were also thrown into fires, while over 114,000 others were beaten, said the agency report titled Forced Migration of Rohingya: The Untold Experience.