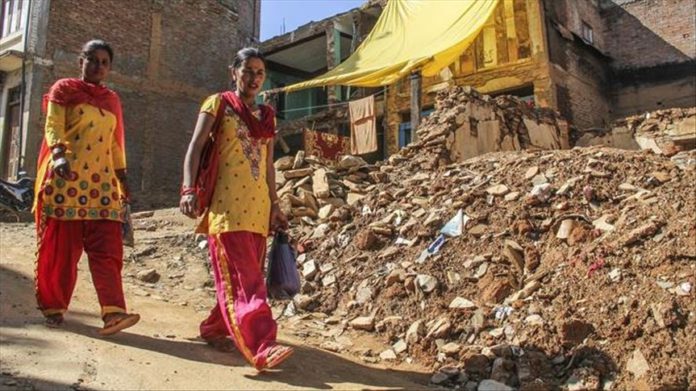 The UN human rights experts on Friday called on India to halt mass evictions that threaten to leave 100,000 people homeless in the northern state of Haryana.

“We appeal to the Indian government to respect its own laws and its own goal of eliminating homelessness by 2022 and to spare homes of 100,000 people who mostly come from minority and marginalized communities,” special rapporteurs of the UN Human Rights Office of the High Commissioner said in a statement.

“It is particularly important that residents be kept safe during the pandemic,” they added.

The statement said demolition of homes began last Wednesday in a village in Haryana state built on protected forest land, even “though the forest was actually destroyed decades ago by heavy mining.”

“Residents have already been hard hit by the COVID-19 pandemic, and the eviction order would put them at greater risk and bring even more hardship to some 20,000 children – many of whom may remain out of school – and 5,000 pregnant or breastfeeding women,” these experts warned.

The statement said the villagers live in Khori Gaon (village) in Faridabad on land that was designated as a protected forest in 1992, “despite there being no forests on it.”

“Some 2,000 homes were demolished earlier in two waves in September 2020 and April this year. Residents challenging the evictions received a severe setback when the Supreme Court last month ordered the complete removal of the settlement by 19 July,” the statement said.

“We find extremely worrying that India’s highest court, which has in the past led the protection of housing rights, is now leading evictions placing people at risk of internal displacement and even homelessness, as is the case in Khori Gaon,” the UN experts said.

“The role of the Supreme Court is to uphold the laws and to interpret them in light of internationally-recognized human rights standards, not to undermine them. In this case, the spirit and purpose of the Land Acquisition Act 2013, among other domestic legal requirements, have not been met.”

Referring to the COVID-19 pandemic and how it badly affected the Indian economy, the experts said: “Lockdowns imposed during the pandemic have made it difficult for settlement residents to earn a living, and they are suffering psychologically because of the eviction threat.”

It is important, the experts said, “this act of mass displacement does not happen during the pandemic.”

“Water and electricity were cut off several weeks ago. Human rights defenders and residents who organized protests say they have been beaten by police and arbitrarily detained. There have also been arbitrary orders against the exercise of the right to peaceful assembly,” the experts said.

“We call on India to urgently review its plans for razing Khori Gaon and to consider regularizing the settlement so as not to leave anyone homeless,” the experts said. “No one should be forcibly evicted without adequate and timely compensation and redress.”

US extends condolences to Turkey amid 'devastating' forest fires