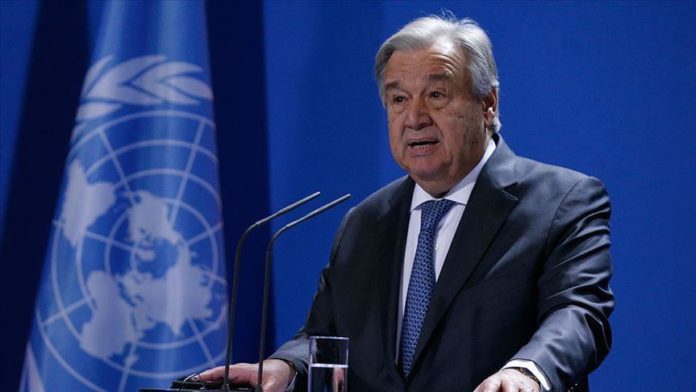 The UN on Monday voiced “total” solidarity with Lebanon, saying it will continue to support the country “in every possible way” following massive explosions that struck the Beirut port last week.

“The blast has come at an already difficult time for Lebanon, with the country already facing economic hardship and impacts of the coronavirus virus,” UN Secretary-General Antonio Guterres said in a briefing, offering his condolences to the families of more than 150 victims.

Guterres called for “robust international support” for all people in need in Lebanon.

The secretary stressed that the UN has undertaken a “swift and wide-ranging response”.

“The Office for the Coordination of Humanitarian Affairs helped to organize the deployment of experts from the International Search and Rescue Advisory Group and the United Nations Disaster Assessment and Coordination system to help first responders in Beirut.

“A plane carrying 20 tons of World Health Organization health supplies landed in Beirut on Wednesday to cover 1,000 trauma interventions and 1,000 surgical interventions for people suffering from injuries and burns as a result of the blast,” Guterres said.

Also within hours of the blast, Najat Rochdi, the UN resident and humanitarian coordinator for Lebanon, released $9 million from the Lebanon Humanitarian Fund to address immediate needs, and on Friday, the Emergency Relief Coordinator Mark Lowcock released a further $6 million, he added.

The UN is supporting the Lebanese Red Cross and other partners in providing temporary shelter for displaced families as well.

‘Voice of Lebanese people must be heard’

Guterres underlined that “at this time of both sorrow and prolonged frustration, the anger of the Lebanese people is palpable.”

“Their voices must be heard,” he said, urging for a “credible and transparent investigation to determine the cause of the explosion and bring about the accountability demanded by the Lebanese people.

“It is also important that reforms be implemented so as to address the needs of the Lebanese people for the longer term,” the secretary added.

Two massive explosions rocked the Port of Beirut last Tuesday after a neglected stockpile of 2,750 tons of ammonium nitrate stored in a warehouse there ignited.

The blasts rocked Beirut to its core, registering 3.5 on the Richter scale and shattering buildings miles in the distance. At least 163 people lost their lives, approximately 6,000 were injured and 300,000 have been left homeless.

Lebanon was already in crisis, plagued with severe financial and economic problems and rampant corruption.