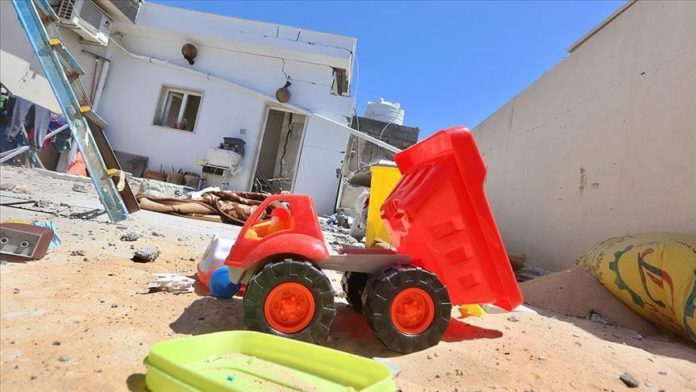 Whenever an arms conflict breaks out, it is mostly the children who are most affected.

These vulnerable members of the society are recruited in wars, their schools are attacked, and are often sexually exploited, abducted and killed.

In order to protect and preserve the rights of children, the United Nations commemorates June 4 of each year as the International Day of Innocent Children Victims of Aggression.

It was first proclaimed on August 19, 1982 during an emergency special session on Palestine when the General Assembly was “appalled at the number of innocent Palestinian and Lebanese children becoming victims of Israel’s acts of aggression.”

As many as 415 million children across the globe live in conflict zones, including 149 million in high-intensity conflict zones, according to the London-based Save the Children.

This means that nearly one in six children live in a conflict zone, said the group’s Stop the War on Children report, released this February and highlighted by the Turkish press.

Children living in Africa are the worst affected, with 170 million living in war zones followed by the Middle East.

For individual countries, the report said, the situation is worst in Nigeria, followed by Mexico, the Democratic Republic of the Congo and Afghanistan.

Since 2010, there has been a 34% increase in the number of children living in conflict zones and 170% increase in crimes against children.

The civil war in Syria, besides the overall devastating impact, has caused a lot of suffering to children.

More than 29,000 children have been killed since 2011, according to a recent joint report by Syrian Network for Human Rights and Anadolu Agency.

Due to the conflict, the UN says 6.7 million Syrians have left the country, including 2.5 million children.

UNICEF reported that while one out of three children cannot receive education, many of them continue their lives without the necessary health facilities.

In its report — The Children of Syria — which was released in March this year, the rights group said that four out of five people in Syria live below the poverty line, leading to their recruitment into fighting, child labor, and child marriage.

Meanwhile, thousands of children remain detained by warring factions, including the YPG/PKK terrorist group and Daesh/ISIS.

Similarly, the Istanbul-based Humanitarian and Social Research Center said in its Orphan Report 2020 that more than 9 million children under the age of 18 need help because of the civil war.

More needs to be done to protect these young beings, and to ensure accountability for violations of their rights.