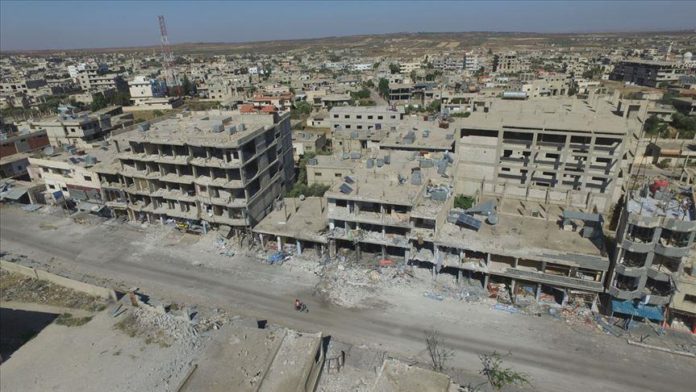 The UN Commission of Inquiry on Syria said Monday its “overarching” recommendation is for an immediate and permanent cease-fire, endorsed by the Security Council and enforced by the key member states supporting the Assad regime and armed groups.

The commission released a report to be presented to the UN Human Rights Council (HRC) on March 11, focusing on people’s disappearance and detentions in the 10-year conflict.

“Such a ceasefire must be genuine, and safeguards should be put into place to ensure that it is not simply used as a means to prepare for fresh offensives, but instead provides the space for Syrian-led negotiations and for the restoration of the basic human rights that have been so long denied,” the commission said.

After 10 years of war, tens of thousands of civilians arbitrarily detained in Syria remain “forcibly disappeared,” while thousands more have been “subject to torture, sexual violence or death in detention,” the commission said.

“Hundreds of thousands of family members have a right to the truth about their loved ones’ fate,” Paulo Pinheiro, who chairs the commission, told a virtual press conference hosted by the UN in Geneva.

He added: “There are today, around 5 armies fighting in Syria. There is already a very complex situation.”

Asked if the Assad regime pays any heed to the commission’s reports, Pinheiro said: “If you read all their comments, and their criticisms…I think they follow very closely what we do.

“The important thing for us that the victims appreciate our work. I think that is, is very important … and … without praising ourselves, the reports became some authoritative contribution for the interpretation of human rights law.”

The Commission of Inquiry’s 30-plus page report was based on over 2,500 interviews done over 10 years and investigations into more than 100 specific detention facilities.

It documents historical and continuing detention-related violations and abuses by nearly every major party that has controlled territory in Syria since 2011.

“The wealth of evidence collected over a decade is staggering, yet the parties to the conflict, with very few exceptions, have failed to investigate their own forces,” said Commissioner Karen Koning AbuZayd.

“The focus appears to be on concealing, rather than investigating crimes committed in the detention facilities.”

The report documented massive detention, disappearances, and patterns of crimes and abuses perpetrated by the Assad regime, and the detention practices of armed groups including under coalitions of the so-called SDF, a group dominated by the terrorist YPG/PKK.

In its more than 35-year terror campaign against Turkey, the PKK – listed as a terrorist organization by Turkey, the US, and EU – has been responsible for the deaths of 40,000 people including women, children, and infants. The YPG is its Syrian branch.

The report also examined the record of the UN-designated terrorist groups Daesh/ISIS and Hay’at Tahrir al-Sham.

Since 2016, Turkey has launched three successful anti-terror operations in northern Syria, across its border, to prevent the formation of a terror corridor and to enable residents to live free of terrorist oppression.

Africa CDC in talks with Pfizer to get coronavirus pill