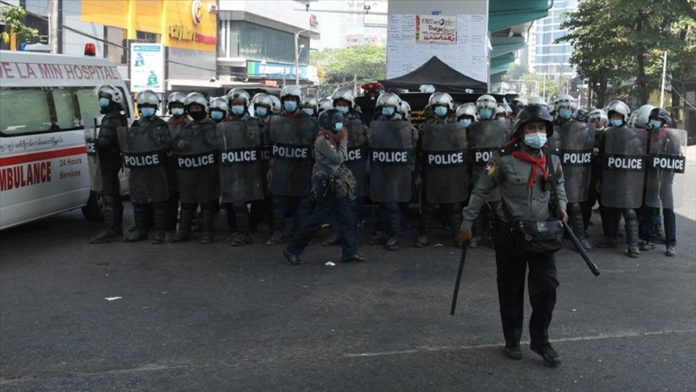 The UN Security Council on Wednesday condemned for the first time the violence against anti-coup protesters in Myanmar and urged the military to exercise utmost restraint.

In an agreed statement, the Council said it “strongly condemns the violence against peaceful protestors, including against women, youth and children.”

“The Council calls for the military to exercise utmost restraint and emphasizes that it is following the situation closely,” said the statement.

Condemnation of the coup was not included in the statement due to China and Russia’s objections.

The 15-member body reiterated its call for the immediate release of members of the government, including State Counsellor Aung San Suu Kyi and President Win Myint.

“The Security Council reaffirms its support for the people of Myanmar and its strong commitment to the sovereignty, political independence, territorial integrity and unity of Myanmar,” said the statement.

On Thursday, the Council’s members expressed deep concern over the situation in the Southeast Asian country in a statement that stopped short of condemning the military coup.

Myanmar continues to face popular demonstrations against the military’s Feb. 1 seizure of power from the democratically elected government.

The anti-coup protests that started on Feb. 6 have continued for over a month in many cities and towns across the country as opponents of the coup demand the release of elected officials and the end of the military junta.

At least 65 people have been killed during the military crackdown.

On Wednesday, at least 200 people were arrested when military forces and police raided townships and a railway residential compound in Yangon, Myanmar’s largest city and commercial hub.