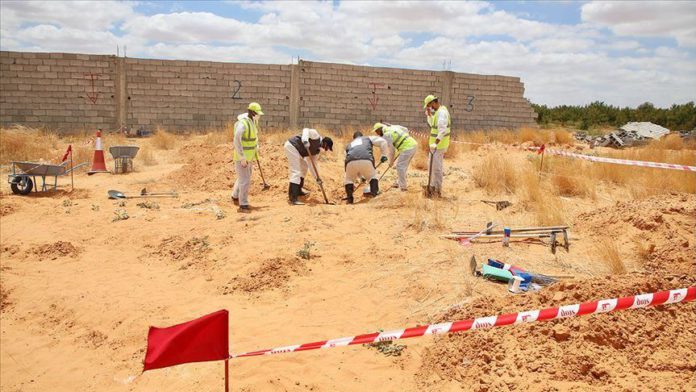 The UN Human Rights Office said Tuesday it is “horrified” by the recent discovery of mass graves in and around the Libyan city of Tarhuna.

UN Human Rights Office spokeswoman Liz Throssell said her office was “horrified by the discovery of mass graves in Tarhuna and its surroundings”.

She was answering written questions from Anadolu Agency.

“We had already called on June 18 for a prompt, thorough, effective, transparent, and independent investigation to establish the facts and circumstances of human rights violations and abuses perpetrated by all parties in Libya,” she said.

She said her office did not contact Libyan authorities regarding the mass graves, but that UN Libyan Support Mission (UNSMIL) had closely followed what transpired and answered the calls of Libyan government officials.

Throssell said that on June 22 Fatou Bensouda, the chief prosecutor of the International Criminal Court (ICC), noted that they have included mass graves in the scope of the ongoing Libyan investigation.

She said the ICC is now in contact with the authorities in Libya.

Libya was referred to the ICC by the UN Security Council in 2011.

Although Libya was not a party to the Rome Statute, the ICC’s founding agreement, the court can investigate crimes committed in Libya due to a decision of the United Nations Security Council.

In a written statement, Bensouda stated that reliable information was provided to the prosecutor’s office. There were 11 mass graves in Terhuna and the surrounding area, which had been cleared from the militia affiliated to warlord Khalifa Haftar.

The ICC Prosecutor’s Office continues its preliminary investigation for war crimes and crimes against humanity committed during the ongoing conflict in Libya since the ouster of late leader Muammer Gaddafi in 2011.

Bensouda warned that mass graves in Libya could constitute “war crime” or “crime against humanity”.

EU calls for resumption of parliamentary activity in Tunisia