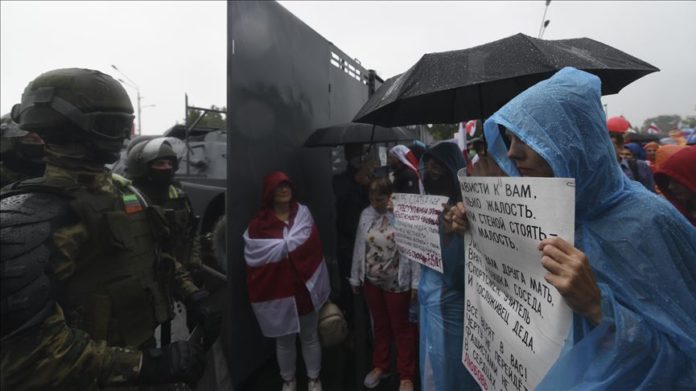 The UN Human Rights Council on Friday adopted a resolution, expressing grave concern at “credible allegations” that human rights violations were committed in Belarus in the run-up to the 2020 presidential election and in its aftermath.

The resolution passed after an “urgent debate” with a vote of 23 in favor, two against and 22 abstentions.

Venezuela and Eritrea voted against the resolution after Russia, China, and Venezuela had tried to stifle debate, including trying to stop an address by a Belarus opposition leader.

The resolution “regrets that the Government of Belarus has not fulfilled its obligations with regard to the right of every citizen to vote and to be elected at genuine periodic elections.”

European Union countries, along with Ukraine, drafted the resolution.

“There has been a steep deterioration of the human rights situation in Belarus in the run-up to, and aftermath of the presidential election of 9th August,” Michael Ungern-Sternberg, Germany’s ambassador to the UN in Geneva, said when he introduced the resolution on behalf of the EU.

“It was held in the absence of meaningful international observation, and it was neither free nor fair. The High Commissioner for Human Rights condemned the violent response of the Belarusian authorities to post-electoral protests, as did the Secretary General’s office,” he said.

“Enforced disappearances, forced abductions and expulsions and arbitrary detentions continue […] every day in Belarus. We call for the immediate release of all those who have been arbitrarily deprived of their liberty.”

Gennady Gatilov, the Russian ambassador to the UN in Geneva, said the council was violating procedural rules.

“In this case, we once again repeat our request and the request of other states to cease the dialogue with the special rapporteur, which is not provided for by the format for urgent debates with states,” he said.

“We do not condone some of the shortcomings of the democratic process that we have seen in various report; but we should genuinely try to help the Belarus Government to address these,” said Sadik Arslan, the Turkish ambassador to the UN in Geneva.

Elisabeth Tichy-Fisslberger, the council president, said: “We are following exactly the procedure we have always had in the case of urgent debates.”