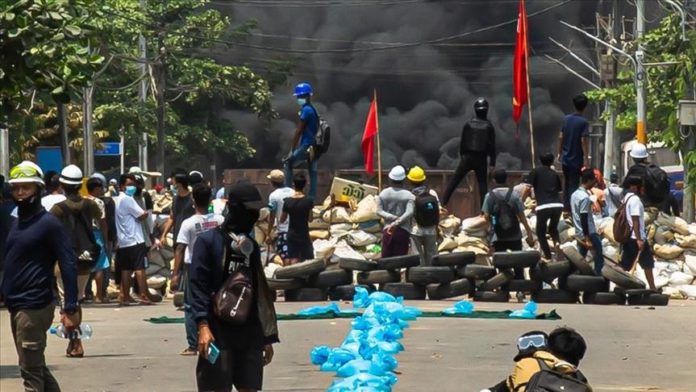 The UN human rights chief on Friday warned of a Myanmar military buildup and said a further escalation in violence is unfolding across Myanmar and must be halted to prevent further loss of life and a deepening humanitarian emergency.

The UN High Commissioner for Human Rights Michelle Bachelet said reports indicate a military buildup, notably in Kayah State in the east and Chin State in the west, following the Feb. 1 coup.

“In just over four months, Myanmar has gone from being a fragile democracy to a human rights catastrophe,” she quoted Bachelet as saying.

“As I had feared, armed conflict and other violence are intensifying in many parts of Myanmar, including Kayah State, Chin State, and Kachin State, with the violence particularly intense in areas with significant ethnic and religious minority groups,” said Bachelet.

“State security forces have continued to use heavy weaponry, including airstrikes, against armed groups and against civilians and civilian objects, including Christian churches.”

Reports of 860 people killed by forces

Credible reports indicate that at least 860 people have been killed by security forces since the Feb. 1 putsch, mostly in protests.

Also, sweeping arrests of activists, journalists, and opponents of the regime have continued across the country, with credible sources indicating that at least 4,804 people remain in arbitrary detention, Shamdasani explained.

The UN rights chief said there appear to be no efforts towards de-escalation “but rather a buildup of troops in key areas, contrary to the commitments the military made to ASEAN to cease the violence.”

“More than 108,000 people have fled their homes in Kayah State over the last three weeks alone, many into forest areas with little or no food, water, sanitation, or medical care,” said Bachelet.

“These are people in urgent need of humanitarian assistance,” Bachelet said.

She also said the international community needs to unify its demand that the Tatmadaw cease the “outrageous use of heavy artillery against civilians and civilian objects.”

Bachelet noted that the newly formed “people’s defense forces” and other armed groups must also take all feasible measures to protect civilians.

The high commissioner appealed for hospitals, schools, and worship places to be protected throughout the country.

The rights office has received credible reports of several incidents in which hospitals, schools, and religious institutions have been entered and occupied by the Tatmadaw, fired upon, and damaged in military actions.

Explosions in or near schools are likely to dissuade parents from enrolling their children for the new school year, warned Bachelet.