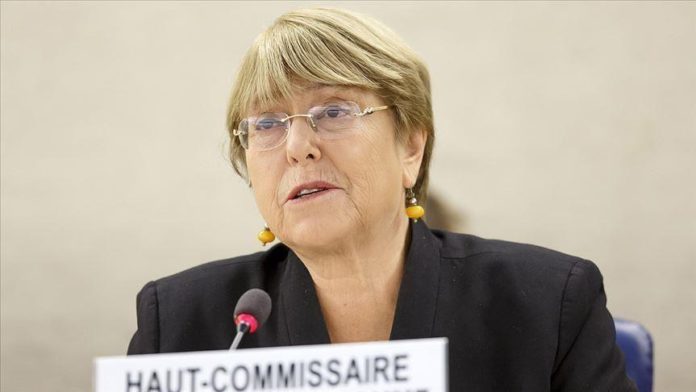 The UN human rights chief on Tuesday said she is “deeply concerned” over Russian President Vladimir Putin’s decision to recognize Ukraine’s so-called Donetsk and Luhansk republics as it raises the risk of serious human rights violations.

The statement from UN High Commissioner for Human Rights Michelle Bachelet came after Putin officially recognized the Donetsk and Luhansk regions as independent states on Monday and signed agreements with their separatist leaders in the Kremlin.

Following Putin’s decision, “I am deeply concerned that any significant escalation in military action creates a heightened risk of serious human rights violations as well as violations of international humanitarian law,” said Bachelet.

She said “at this critical juncture,” the highest priority must be to prevent further escalation and civilian casualties, displacement, and destruction of civilian infrastructure.

“I call on all sides to cease hostilities and to pave the way for dialogue instead of setting the stage for further violence,” she stressed.

Bachelet said her offices are closely monitoring the situation “on both sides of the contact line in the east of the country.”

Earlier in the day, Jens Laerke, Geneva spokesman for the UN Humanitarian Affairs Office (OCHA), told a news conference that in the past few days in eastern Ukraine, “we have seen reported increases in hostilities.”

“And that is a stark reminder of the reality that children, women, and men in eastern Ukraine have faced for the last eight years,” said Laerke.

Since the 2014 Russian invasion of Crimea, Turkic Tatars have reported persecution by Russian authorities.

The latest moves follow Russia amassing over 100,000 troops on Ukraine’s borders, with Western countries saying the buildup is the prelude to an invasion, a charge Russia denies.