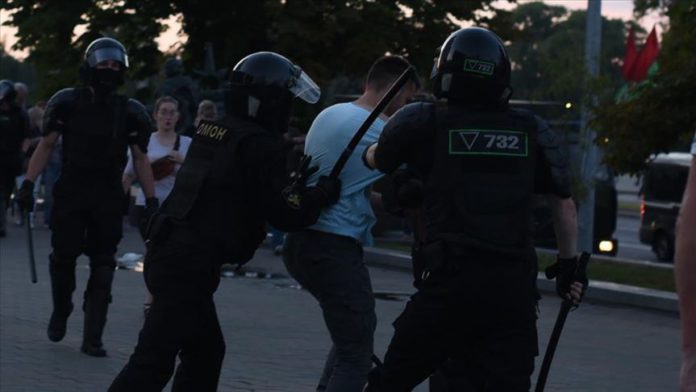 The United Nations human rights chief on Wednesday condemned the violent response of authorities in Belarus to peaceful demonstrations across the country following the presidential election and called for people’s grievances to be heard.

“I remind the Belarusian authorities that the use of force during protests should always be exceptional and a measure of last resort, clearly differentiating between any violent individuals and peaceful protesters, against whom force should not be used,” said UN High Commissioner for Human Rights Michelle Bachelet.

She said that reports suggest that approximately 6,000 people have been detained in the last three days, including bystanders and minors.

This suggests a trend of massive arrests in clear violation of international human rights standards and “even more disturbing are the reports of ill-treatment during and after detention,” said Bachelet.

The protests continued after incumbent Alexander Lukashenko was declared the winner of Sunday’s presidential election, his sixth term in office with over 80% of the vote, said the country’s election commission.

Officials maintain the results are valid.

However, the opposition candidates protested the results, supported by the thousands of people who took to the streets throughout the country.

The rights office said that following the announcement of contested preliminary results from Sunday’s election, mostly peaceful protests erupted throughout Belarus, “prompting a heavy crackdown by the security forces”.

Reports indicate that police officers beat protesters, including after they were detained, said the human rights office.

At least 250 people had been injured and one protester died in unclear circumstances.

“State authorities must allow and facilitate the exercise of the rights to freedom of expression and peaceful assembly and not repress it,” said Bachelet.

“People have the right to speak up and express dissent, even more in the context of elections, when democratic freedoms should be upheld, not suppressed,” said the UN human rights chief.

“I remind the Belarusian Government of the absolute prohibition on torture and other ill-treatment of detainees,” Bachelet said.

She called for the immediate release of all those unlawfully detained, and for prompt, thorough, independent and impartial investigations into allegations of human rights violations.

Bachelet also expressed concern at the intermittent internet shutdowns since Sunday and the blocking of many social media platforms, NGOs, and news websites.

She said this amounts to a severe curtailment of the right of freedom of expression, including the right to seek and provide information.