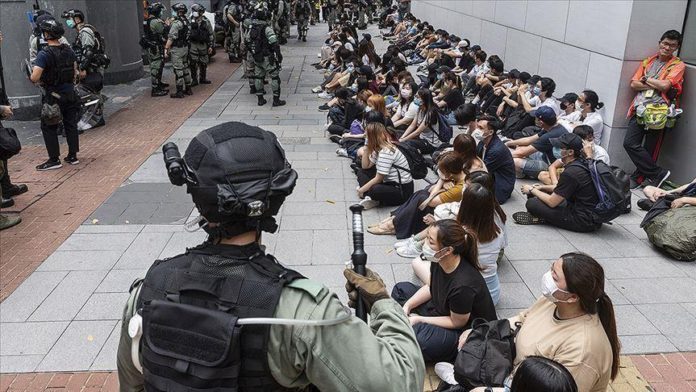 The UN Human Rights Office called on Thursday for the immediate release of more than 50 persons arrested for “subversion” a day earlier in Hong Kong.

“We are deeply concerned about the arrests on Wednesday of 53 political activists, academics, former legislators, current district councilors, and lawyers,” Liz Throssell, spokeswoman of the UN Human Rights Office, said in a statement.

The government of the special administrative region said the police took action “specifically targeting active players who organized, planned, committed or participated in acts of subversion.”

“These persons are suspected to have violated the offence of subversion under the National Security Law,” it said in a statement.

However, the UN official said that these latest arrests indicate that “the offence of subversion under the National Security Law is indeed being used to detain individuals for exercising legitimate rights to participate in political and public life.”

Hong Kong was a British colony up until 1997, and is now a semi-autonomous Chinese territory. Following unrest and protests, China implemented the controversial security law in July 2020, triggering international criticism.

“The UN Human Rights Office and independent UN human rights experts have repeatedly warned that offences such as subversion under the National Security Law, passed in June 2020, are vague and overly broad, facilitating abusive or arbitrary implementation,” the statement said.

“Yesterday’s arrests were the latest in a series of detentions related to the exercise of fundamental freedoms, including the right to peaceful assembly, in Hong Kong.”

Wong is currently serving a jail sentence for his role in organizing democracy protests, whereas Tak-chi is in custody on a sedition charge.

“Police also raided Joshua’s home for allegedly violating the national security law this morning…,” a statement on Wong’s Twitter account, which is now managed by his friends, read.