TurkishPress
Home News UN: Pursuit of justice should step up in Syria 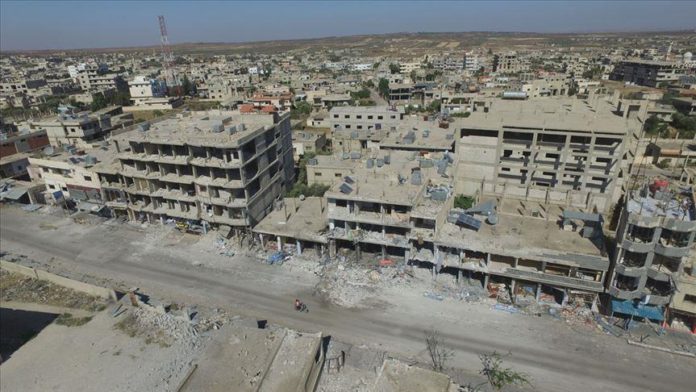 Repeated attempts to refer Syria to the International Criminal Court have stalled, but it is vital that national courts continue to conduct fair, public and transparent trials, the UN human rights chief said Thursday.

In a report to the UN Human Rights Council, Michelle Bachelet said that trials for serious crimes should be complemented by initiatives that further realize victims’ rights.

These included the “rights to truth and reparation.”

Bachelet noted that Syria is about to enter its 11th year of violence and conflict, and the pursuit of truth, justice, and reparations for victims must not only continue but be stepped up.

“The violence that spiraled into an armed conflict has left hundreds of thousands of Syrians dead, millions displaced both within and outside the country, and many Syrian families struggling to establish the truth of what happened to their loved ones,” said Bachelet.

She said the recent conviction of a former Syrian intelligence officer by a German trial court for aiding and abetting crimes against humanity was “an important step forward” on the path to justice.

That decision follows a series of criminal judgments in recent years in national courts outside Syria, addressing severe criminality cases committed over the last decade of conflict.

The International, Impartial and Independent Mechanism established by the General Assembly and the Commission of Inquiry on Syria launched by the Human Rights Council have also played a key role in bolstering such proceedings.

“There have been repeated attempts to refer the situation in Syria to the International Criminal Court, but with such efforts stalled, it remains vital that national courts continue to conduct fair, public, and transparent trials and reduce the accountability gap for such serious crimes,” said Bachelet.

She went on to say that missing and disappeared people, already a severe concern in Syria before 2011, must be addressed.

Given the UN Human Rights Office’s lack of access to Syria, she said it is difficult to establish with any precision the number of missing men, women, and children, but the figure is estimated to be in the tens of thousands.

The missing include those forcibly disappeared and detained in official and makeshift facilities run by government forces across Syria and victims of detention and enforced disappearances by non-state armed groups.

“Enforced disappearance is a continuous crime that has an appalling impact on the individual whose fate is unknown and on their family, causing continuing trauma for them and severely curtailing the enjoyment of their human rights,” the UN human rights chief said.

Bachelet joined the call to create an independent mechanism with an international mandate to clarify the fate and whereabouts of missing people, identify human remains, and provide support to their families.

The rights chief further called on the Syrian regime to disclose all places of detention, official and unofficial, provide complete lists of names and ensure formal registration of all those held in these facilities.

Those detained should be allowed to communicate with their families.

“If an individual has died, then their body or remains should be returned to their family, in accordance with international law and in full respect of the deceased and their loved ones,” she said.