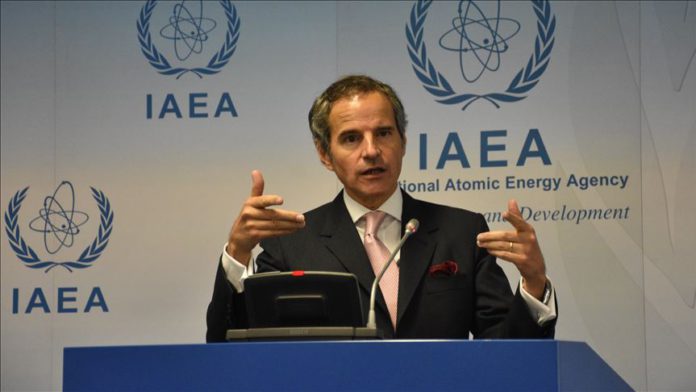 The chief of the International Atomic Energy Agency (IAEA), Rafael Mariano Grossi, will visit Tehran on Monday, his first visit to the country since taking office in December.

Grossi will hold talks with high-level government officials in Tehran on cooperation between the two sides and granting IAEA inspectors access to nuclear sites, according to a statement issued by the nuclear watchdog on Saturday.

“I have decided to come personally to Tehran so that I can reinforce the importance of cooperation and the full implementation of all safeguards commitments and obligations with the IAEA,” Grossi said.

The objective of the visit, he underlined, was to make “progress” in addressing the “outstanding questions” that the IAEA has with Iran, particularly the issue of “access” to nuclear sites.

The IAEA chief has in recent months issued strong statements, calling on Tehran to allow IAEA inspectors access to two nuclear sites in Iran. The statements have not gone down well with Tehran.

In his first address to the IAEA’s board of governors in March, Grossi had called on Iran to “cooperate immediately and fully” with the nuclear agency and provide access to inspectors.

In June, he told reporters in Vienna that Iran has “not engaged in substantive discussions to clarify our questions related to possible undeclared nuclear material and nuclear-related activities”.

Last month, Grossi warned that “things will be bad” for Iran if the IAEA inspectors were denied access to the nuclear sites, and said it was “absolute necessity for us to resolve the issue very soon”.

Iran has so far refused access to the two nuclear sites, maintaining that the IAEA had no legal basis to inspect them since the activities at the sites are from early 2000s.

Earlier, Iran’s Foreign Minister Javad Zarif had criticized the European countries for adopting a draft resolution to push for inspection of the two nuclear sites in question.

Iran’s envoy to the IAEA Kazzem Gharibabadi said “no country will open its territory to the inspections” based on allegations of its “enemies”.

Gharibabadi on Saturday confirmed the upcoming visit of the IAEA chief, saying it comes upon an invitation from the Iranian government.

The visit coincides with the looming uncertainty over the 2015 Iran nuclear deal (JCPOA), following the US push to reinstate all international sanctions on Tehran by triggering the snapback mechanism under the agreement.

There is a speculation that Iran will exit the deal and end cooperation with the IAEA, including leaving the Non Proliferation Treaty (NPT), if the pre-2015 sanctions are reinstated.

According to officials in Tehran, the issue is likely to figure prominently in the discussions between the IAEA chief and Iranian government officials.

US: Protests erupt in capital over death of Black man