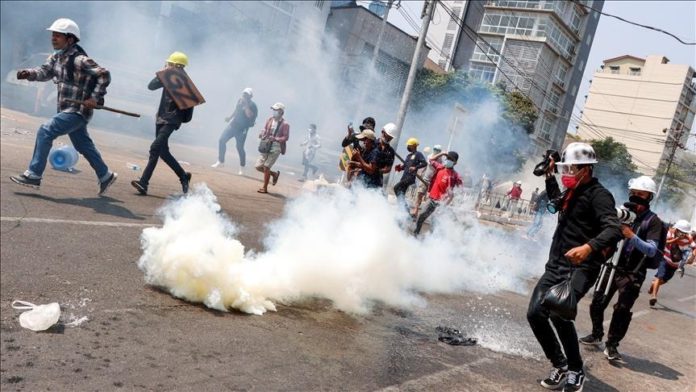 Myanmar junta’s brutal response to peaceful protests likely meets the legal threshold for crimes against humanity after credible reports of the “murder” of at least 70 people, a UN special investigator told the Human Rights Council Thursday.

“The people of Myanmar need not only words of support but supportive action,” said Tom Andrews, the UN special rapporteur on human rights in Myanmar, saying there is video evidence to back his report.

“They need the help of the international community, now.”

Security forces in Myanmar have unleashed disproportionate violence to clamp down on anti-coup protesters which started just after Feb. 1 when the country’s de facto leader Aung Suu Kyyi was ousted and detained by the military junta in a coup.

“With the UN Security Council seemingly unwilling to invoke its Chapter VII authority,” with regards to threats to peace, Andrews said, UN member states must rally together to take action against the junta.

He said the junta is “a murderous illegal regime” and that the “crimes against the Rohingya people continue” pointing to “higher-level command and control.”

“Today, I am therefore urging that as many member states as possible commit to taking strong, decisive, and coordinated action as a coalition of nations — an Emergency Coalition for the People of Myanmar,” he said.

Andrews called for the imposition of multilateral sanctions on the junta and on the military-owned Myanmar Oil and Gas Enterprise, whose revenues from natural gas projects are set to reach $1 billion this year.

He said they could also impose an international arms embargo on Myanmar because “the people of Myanmar are desperate.”

Andrews stressed that a growing body of reporting indicates that “the junta’s security forces are committing acts of murder, imprisonment, persecution and other crimes as part of a coordinated campaign, directed against a civilian population.”