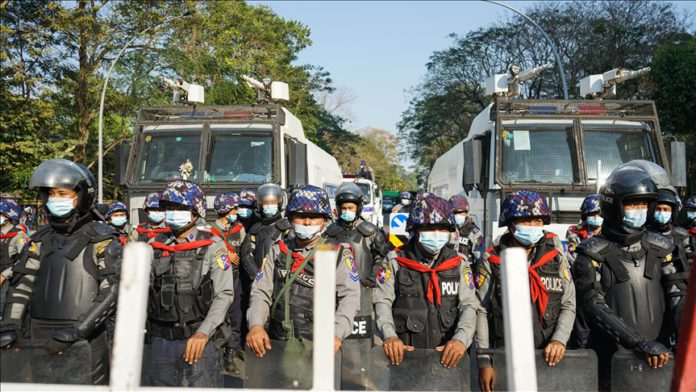 The United Nations Human Rights Council said it is to hold a special session Friday on Myanmar, on the day the UN office there voiced strong concerns over Tuesday’s reported use of violence by security forces against demonstrators.

“I call on the security forces to respect human rights and fundamental freedoms, including the right to peaceful assembly and freedom of expression,” Ola Almgren, UN Resident Coordinator and Humanitarian Coordinator in Myanmar, said in a statement.

“The use of disproportionate force against demonstrators is unacceptable”, he noted.

The military takeover on Feb. 1 followed escalating tensions between the military and the government after the November 2020 elections, won by Aung San Suu Kyi-led National League for Democracy (NLD).

Politicians, journalists and activists were arbitrarily detained after the coup, including Suu Kyi, and the crackdown triggered the calling of the special HRC session.

“This session is being convened following the requests submitted late yesterday by the United Kingdom and the European Union,” HRC spokesman Roland Gomez told journalists at a UN briefing in Geneva.

Gomez said the vast majority of speakers will be participating virtually and “we also expect to receive a draft resolution prior to Friday’s session”.

Gomez read a message from the new president of the HRC, former Fiji ambassador to the UN in Geneva, Nazhat Shameem Khan, in which she welcomed the announcement by the United States at the Council Monday that it will rejoin the body as an observer.

“Such engagement greatly increases the council’s ability to deliver its mandate of promoting and protecting all human rights aimed at improving the lives of all people around the globe,” said Gomez quoting Khan.

Gomez said the next full session of the HRC would take place from Feb. 22 to March 23.

“This marks the first time the United States will participate in a plenary meeting of the Human Rights Council since they relinquished their membership in June 2018,” said Gomez.

Madagascar slams WHO for not endorsing its herbal cure

US to cut troop levels in Afghanistan