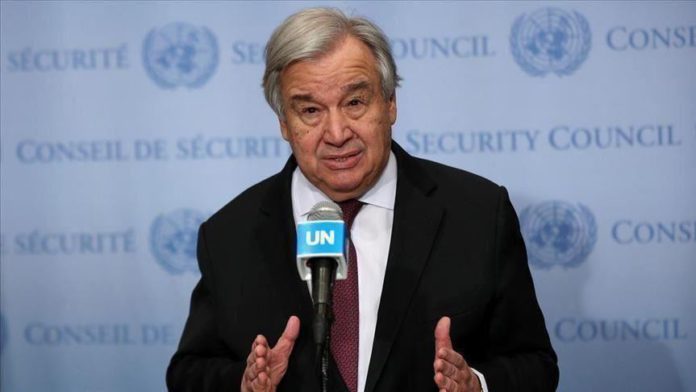 UN Secretary-General Antonio Guterres said Wednesday the conflict in Libya has entered a “new phase” due to increased foreign interference in the country.

“The conflict has entered a new phase, with foreign interference reaching unprecedented levels, including in the delivery of sophisticated equipment and the number of mercenaries involved in the fighting,” Guterres told the UN Security Council through video-conference.

“Time is not on our side in Libya,” he warned and urged the international community to use every opportunity to unblock the political dead-end.

Although noting that the situation on the frontlines has mostly been quiet since 10 June, with UN-recognized Government of National Accord (GNA) forces 25 kms from the Mediterranean coastal city of Sirte, he said the UN is “very concerned” by an alarming military build-up around that city, including “a high level of direct foreign interference” in violation of a UN arms embargo, Security Council resolutions and commitments made at the Berlin International Conference on Libya six months ago.

Taking a swipe on GNA’s national election call, Guterres warned that prospects for Libya-wide polls are “fragile,” given military developments and support from external backers.

He stressed that almost 30,000 people have been forced to flee their homes due to continuing fighting in Tripoli’s southern suburbs and Tarhouna, bring the total of internally displaced persons in Libya to more than 400,000.

Between 1 April and 30 June, the United Nations Support Mission in Libya recorded at least 356 casualties, including 102 civilian deaths and 254 civilian injuries, he added.

The Secretary said the oil blockade imposed in January by renegade commander Khalifa Haftar’s forces under the Libyan National Army in the central and eastern parts caused a $6 billion loss.

He added that the UN is working to mediate and end the blockade that aims “to alleviate economic hardship compounded by the conflict and COVID-19.”

The country’s new government was founded in 2015 under an UN-led agreement, but efforts for a long-term political settlement failed due to a military offensive by warlord Haftar, who has been backed by France, Russian paramilitary group Wagner, United Arab Emirates and Egypt.