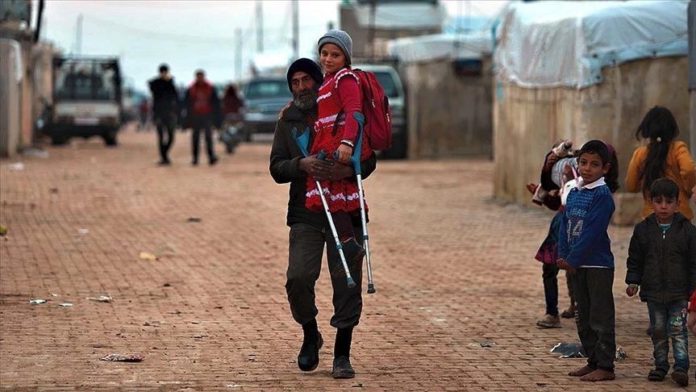 The UN Population Fund (UNFPA) Turkey and the Association for Solidarity with Asylum Seekers and Migrants (SGDD-ASAM) have launched a project to increase the access of refugees with disabilities and their support persons in Turkey to protection services.

The project will be funded by the EU.

In a statement issued on Wednesday, UNFPA Turkey said the country is hosting 4 million refugees, including 3.6 million Syrians, more than any country in the world.

According to a research conducted by the UN Organization for Migration (IOM) in 2017, one in every 10 refugee households has a member with disabilities.

“Disability makes refugees more vulnerable in many areas such as employment, or accessing education and health services, and might lead to psychological social problems due to low self-esteem and feeling excluded from society,” UNFPA Turkey said.

A survey by the UNFPA Turkey suggested that refugees with disabilities are often in need of health support as half of them need surgery and medication, whereas one-third need prosthetics and orthopedic devices.

More than 50% of the refugees who participated in the survey reported difficulties in accessing healthcare services due to challenges such as transportation, financial hardship and language barrier.

The Increasing Access of Refugees with Disabilities to Protection Services in Turkey Project, launched by UNFPA in partnership with SGDD-ASAM with the financial support of European Union Humanitarian Aid, aims to contribute to the solution of these problems.

“In scope of the project, refugees and migrants living with disabilities, as well as their support persons are provided with protection services including consultations, information, psycho-social support, gender-based violence prevention and response services, as well as referral and support in accessing other services through two service units in Ankara and İzmir,” UNFPA Turkey said.

11 US troops injured by Iranian strikes in Iraq: Report