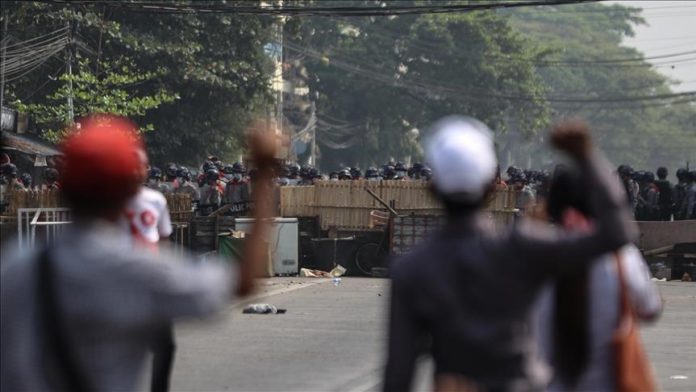 Christine Schraner Burgener told the Security Council that as the military, formally known as the Tatmadaw, has increased its bloody repression, ethnic armed groups in the country “are taking clear stances of opposition, increasing the possibility of civil war at an unprecedented scale.”

“The military’s cruelty is too severe,” she said in closed consultations with the council, according to a copy of her remarks seen by Anadolu Agency. “Already vulnerable groups requiring humanitarian assistance including ethnic minorities and the Rohingya people will suffer most, but inevitably, the whole country is on the verge of spiraling into a failed state.”

At least 141 people, including children, were shot dead by Myanmar’s ruling military regime on Saturday in a violent crackdown against pro-democracy protests that erupted after the junta’s Feb. 1 seizure of power. The mass killings marked the country’s bloodiest since the coup took place.

The Assistance Association for Political Prisoners, a Thailand-based monitor, placed the death toll since the military’s Feb. 1 coup at 536 after 15 people were killed on Wednesday alone.

Burgener pleaded with member states to take action, saying “a bloodbath is imminent.”

“The most serious international crimes and violations of international law appear to be happening in plain sight. I fear this trend will become bloodier as the Commander-in-Chief seems determined to solidify his unlawful grip on power by force,” she said.

“This council must consider potentially significant action that can reverse the course of events in Myanmar. Looking back ten years from now, how will history judge this inaction? I hope you can act while there is still time to avoid the worst outcome by overcoming caution and disagreement,” she added.

Last month, Myanmar’s military ousted the elected government of Aung San Suu Kyi after her National League for Democracy (NLD) party made sweeping gains in nationwide elections in November. In response to the coup, civilian groups across the country launched a civil disobedience campaign that has included mass demonstrations and sit-ins.