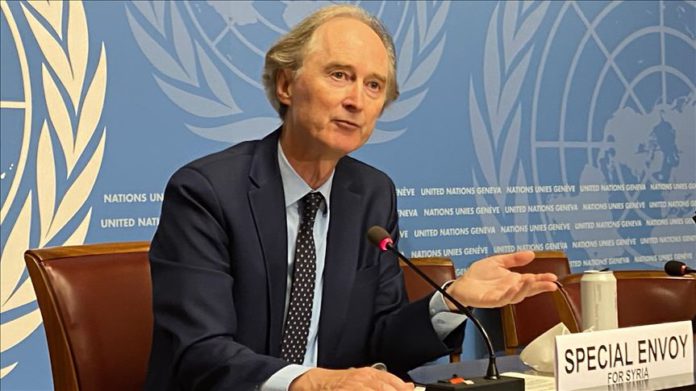 The UN Special Envoy for Syria said Friday he hopes the Syrian peace talks due to restart on Monday in Geneva lead to progress, but he cautioned against expectations of a “miracle or breakthrough.”

“No one expects that this meeting here next week will produce a miracle or a breakthrough that’s not what this is about,” Geir Pedersen said at a briefing for journalists at the UN in Geneva in an answer to a question from Anadolu Agency.

“This is about the beginning of a long and cumbersome process where we hopefully can start to see progress and that this progress can also lead to progress in other areas that we need to implement when it comes to Security Council resolution 2254.”

Ahmad Kuzbari will represent the Bashar al-Assad regime and Hadi al-Bahra will be there to speak for the opposition Syrian Negotiations Commission.

Pedersen said he briefed the Security Council on Wednesday about the damage of the nearly 10-year-long war.

“As I said to the Security Council, there has been untold tragedies during this period, and of course now, with what is happening in Lebanon with a tragic explosion, we also know that this has had a deep impact on Syrians.

“Many, many being killed and wounded and of course, it also has an impact on their livelihood, and many are being left homeless and even hungry.”

The last round of talks on Syrian peace failed to start late last November due to failure to reach an agreement on the agenda.

Anadolu Agency asked Pedersen if this round could forestall such a likelihood.

“I think what we have learned now is to respect the agreement that has already been negotiated. You know, it was quite a process before we managed to agree on the terms of reference and the rules of procedure,” said Pedersen.

“And that serves as the basis for the meetings that we are going to have,” said Pedersen, adding he would “take nothing for granted.”

“I am confident that we all have learned the lesson. When it comes to confidence-building measures, obviously the fact that we will be meeting here in Geneva, after nine months, is an important step in the right direction. But as I’ve said many times, it is not enough.”