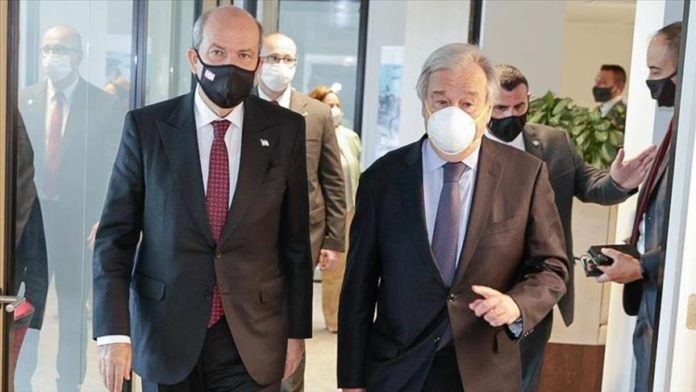 In a move hinting at tentative recognition of the Turkish Cypriot state, the UN secretary-general may include the words “two self-governing regions” in a Cyprus report to be submitted to the Security Council in July, according to a Greek Cypriot media report.

The news conveyed by Jane Holl Lute, the UN Cyprus envoy, in a meeting with Greek Cypriot leader Nicos Anastasiades last Tuesday drew a strong backlash from the Greek Cypriot side, according to Phileleftheros daily.

Lute told Anastasiades that the inclusion of the words “self-governing regions” is part of UN chief Antonio Guterres’ efforts to encourage the Turkish side and may help address some concerns of the Turkish Cypriots.

The Greek Cypriot administration balked at the idea, saying it would be akin to giving sovereignty to the Turkish Republic of Northern Cyprus (TRNC), the report said.

On Friday, TRNC President Ersin Tatar said official negotiations on the Cyprus issue can only start once the TRNC’s sovereignty is recognized, a recognition now only given by Turkey.

Meeting with Guterres in Brussels, Tatar reiterated the need for acceptance of equal international status.

He told reporters that his discussions with the UN chief were “beneficial” and “sincere,” adding that Guterres will evaluate if there will be a second 5+1 meeting in Geneva.

The unofficial first 5+1 meeting – with both sides of the island, guarantor countries Turkey, Greece and the UK, and the UN – was held in Geneva from April 27 to April 29.

However, no common ground was found to begin negotiations.

Guterres suggested that the process “could be accelerated and handled more seriously” with the appointment of a special representative, said Tatar, adding that the TRNC will consider the suggestion.

Cyprus has been divided since 1964, when ethnic attacks forced Turkish Cypriots to withdraw into enclaves for their safety. In 1974, a Greek Cypriot coup aiming at Greece’s annexation led to Turkey’s military intervention as a guarantor power.

The Greek Cypriot administration, backed by Greece, became a member of the European Union in 2004, although that year most Greek Cypriots rejected a UN settlement plan in a referendum envisaging a reunited Cyprus joining the EU.