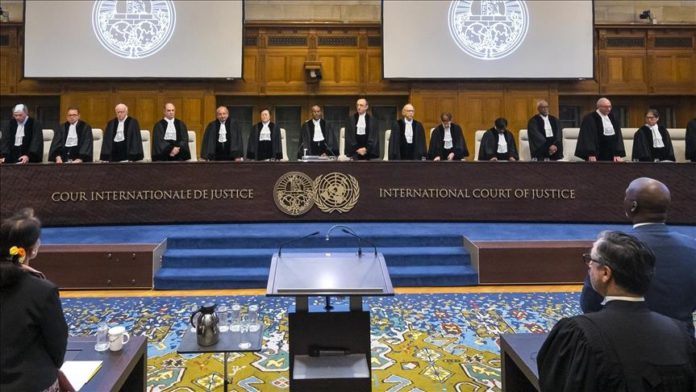 The top UN court on Monday resumed hearing of the Rohingya genocide case against Myanmar in The Hague where the junta regime represented the Southeast Asian nation.

Myanmar, which is accused of committing genocide of the Rohingya community, presented its objections before the judges at the International Court of Justice (ICJ).

The ICJ has been hearing the case brought by Gambia in November 2019, accusing Myanmar of violating the Genocide Convention in its brutal crackdown on the Rohingya community.

However, following a deadly military coup in Myanmar last year in February, activists have expressed concern whether the ICJ hearing the junta regime would grant it any legitimacy.

Until Feb. 27, for four days, the ICJ judges will hear the junta’s objections to the jurisdiction of the court.

Presiding judge Joan Donoghue told the court that the parties in cases before the court “are states, not particular governments.”

Ko Ko Hlaing, the junta regime’s minister for international cooperation, said the “military government wants to cooperate with the judges.”

“In arguing that the court lacks jurisdiction or that the case is inadmissible, Myanmar is therefore not thereby seeking to impede the judicial process of the court. On the contrary it’s seeking to answer the proper administration of justice. Myanmar raises these preliminary objections with utmost respect to the court,” he said.

Tens of thousands of Rohingya were killed and thousands of women and girls were raped when Myanmar forces launched a crackdown on the minority Muslim community in Rakhine state in August 2017.

More than 1.2 million Rohingya, described by the UN as the world’s most persecuted people, were forced to flee Myanmar and continue to live in refugee camps in Bangladesh.

Progress on the case filed by Gambia against Myanmar for violating the Convention on the Prevention and Punishment of the Crime of Genocide has been slow.

In January 2020, the ICJ imposed “provisional measures,” ordering the end to genocidal practices against the Rohingya.

Myanmar was previously being represented in the case by former State Councilor Aung San Suu Kyi, who was overthrown in the coup and has been jailed by the junta on various charges.

The military takeover has triggered mass protests in Myanmar, with the junta forces having killed more than 1,500 people in a crackdown on dissent, according to the Assistance Association for Political Prisoners, a local monitoring group.