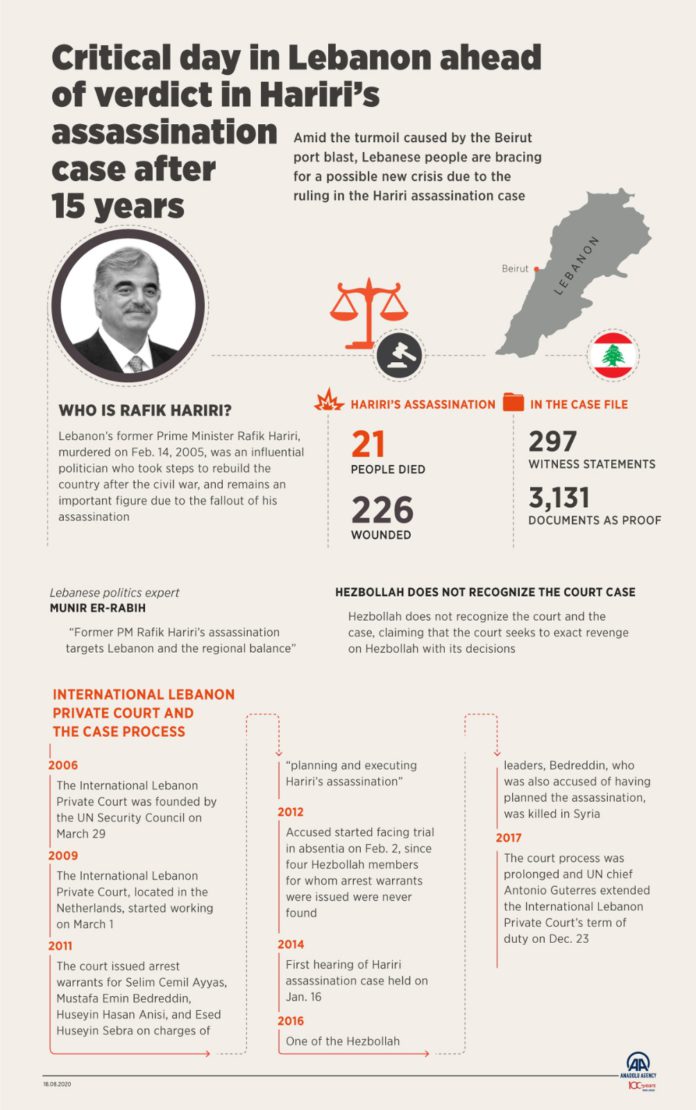 Ayyash was a member of the Iran-backed Hezbollah group, and according to prosecutors, he used a cellphone which was critical in the attack.

The judges said they were “satisfied beyond a reasonable doubt” that the evidence showed that Ayyash possessed “one of six mobiles used by the assassination team.”

However, the tribunal said there was no evidence that “the Hezbollah leadership” or Syrian regime were involved in the assassination.

“The trial chamber is of the view that Syria and Hezbollah may have had motives to eliminate Mr Hariri and his political allies, however, there is no evidence that the Hezbollah leadership had any involvement in Mr Hariri’s murder and there is no direct evidence of Syrian involvement,” said Judge David Re, reading a 150-page summary of the court’s 2,600-page decision.

The tribunal acquitted other defendants — Hassan Marei, Hussein Oneissi, and Assad Sabra — as the evidence against them were considered “insufficient.”

The UN-backed court ruled Hezbollah’s Mustafa Badreddine was not mastermind of Hariri’s assassination as it was alleged.

The judges said the DNA evidence showed the blast that killed Hariri was carried out by a male suicide bomber who was never identified.

The court started its session with a minute of silence for those who lost their lives and were affected by the Aug. 4 explosion in Beirut and continued with the judges reading the verdict.

On Feb. 14, 2005, Hariri was killed in a massive car bomb that targeted his convoy in Beirut.

Later the same year, Hariri’s son, Saad, succeeded his father in the premiership after winning elections.

In 2007, a Special Tribunal for Lebanon was drawn up to look into the elder Hariri’s assassination.

Hezbollah, for its part, has refused until now to hand over the suspects.

In 2017, the UN extended the tribunal’s mandate for three more years.

Initially scheduled for Aug. 7, the verdict was postponed due to the “out of respect for the countless victims” of Beirut explosion of Aug. 4.