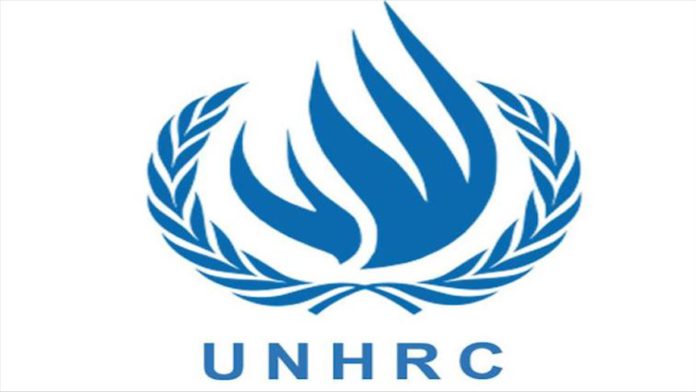 The UN Human Rights Council on Friday condemned racially discriminatory and violent practices by law enforcement agencies against Africans and those of African descent, particularly those which led to the May 25 death of George Floyd in the US.

The resolution against police brutality, revised from an earlier one that singled out the United States, was adopted in the HRC by consensus, and called for a report on “systemic racism, violations of international human rights law against Africans and people of African descent.”

It passed unanimously after the earlier version proposed by the African Group had called for the UN to form an independent commission to “investigate police killings of black people” and violence against peaceful protesters in the US.

The revised resolution after behind-the-scenes discussions said it “strongly condemns the continuing racially discriminatory and violent practices perpetrated by law enforcement agencies against Africans and people of African descent.”

It referred “in particular” to the one “which led to the death of George Floyd on 25 May 2020 in Minnesota… and the deaths of other people of African descent, and further condemn the structural racism in the criminal justice system.”

The resolution expressed alarm “at the resurgence of violence, racial hatred, hate speech, hate crimes, neo-Nazism, neo-Fascism and violent nationalist ideologies based on racial or national prejudice, including the resurgence of racial superiority ideologies that incite hatred and violence against Africans and people of African descent.”

Turkey has repeatedly warned of a rising tide of hate ideologies in Europe, in particular Islamophobia, xenophobia, and anti-Semitism.

On Wednesday, Floyd’s brother called for the UN to form an independent commission to “investigate police killings of black people” and what happened in the US after he died at the hands of police.

Floyd, an unarmed black man, died after being pinned down by a white police officer in Minneapolis, Minnesota, last month, sparking ongoing protests across more than 300 US cities and many others across the world.

“My brother George Floyd is one of the many black men and women that have been murdered by police in recent years,” said Philonise Floyd, addressing the council from the US via video link.

“The sad truth is that the case is not unique. The way you saw my brother tortured and murdered on camera is the way black people are treated by police in America,” he added.

The 47-member state HRC held the specially called debate, but the United States did not take the floor.

The US withdrew from the council in 2018, over charges of alleged bias against Israel and allegations that the body serves as a protector of rights abusers.

It did not address the debate, but Andrew Bremberg, the US ambassador to the UN in Geneva, issued a written statement beforehand saying: “The United States recognizes and is committed to addressing its shortcomings, including racial discrimination and injustices that stem from such discrimination that persist in our society.”