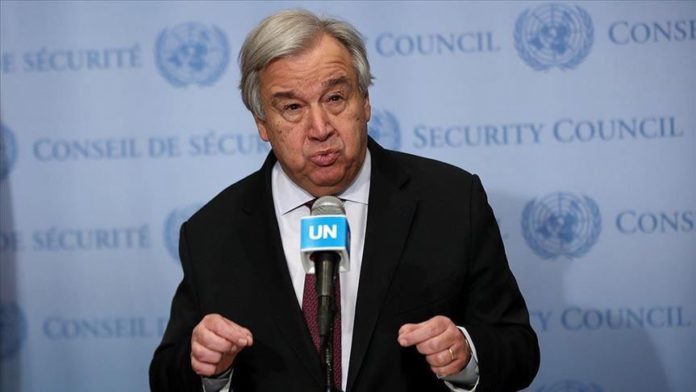 The UN chief on Monday condemned the continuing escalation of tensions in the Upper Karabakh conflict area despite repeated appeals from the international community to immediately halt the fighting.

“He is gravely concerned by reports of the extension of hostilities, including the targeting of populated areas. He reminds all sides of their obligations to protect civilians and civilian infrastructure under international humanitarian law,” Stephane Dujarric, spokesman for the UN Secretary-General Antonio Guterres, said in a written statement.

The statement urged the sides — Armenia and Azerbaijan — to immediately cease all hostilities, and reiterated that there was no military solution to the conflict.

”He [Guterres] appeals to all relevant regional and international actors to actively exercise their influence to achieve an urgent end to the fighting and return to negotiations under the auspices of the OSCE Minsk Group Co-Chairs.”

The OSCE Minsk Group – co-chaired by France, Russia and the US – was formed in 1992 to find a peaceful solution to the conflict, but to no avail.

On Monday, the foreign ministers of the OSCE Minsk Group co-chair countries also condemned the “unprecedented and dangerous escalation of violence” between Armenia and Azerbaijan, calling on the parties to institute a cease-fire.

In a joint statement the top officials stressed “unconditionally that recent attacks allegedly targeting civilian centers – both along the Line of Contact and on the territories of Azerbaijan and Armenia outside the Nagorno-Karabakh conflict zone – and the disproportionate nature of such attacks constitute an unacceptable threat to the stability of the region.”

Many world powers including Russia, France and the US have urged an immediate cease-fire. Turkey, meanwhile, has supported Baku’s right to self-defense.

Some 20% of Azerbaijan’s territory, including the Upper Karabakh, has remained under illegal occupation by Armenia for roughly three decades.

Over 1 million Azerbaijanis became internally displaced persons, while 20,000 were martyred by Armenian forces and 50,000 were wounded and became disabled, according to Azerbaijan’s official figures.