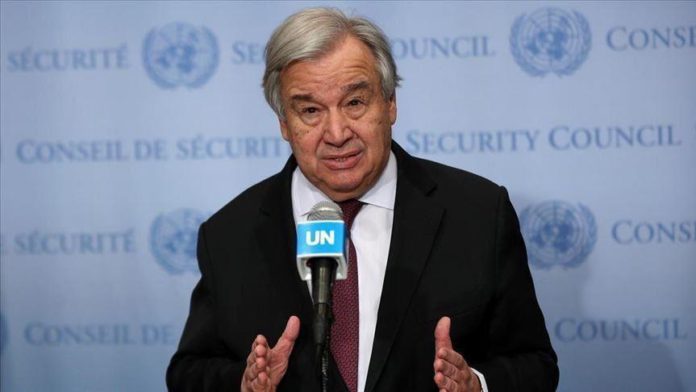 Guterres voiced concern for Kabore, whose whereabouts remain unknown following the coup, as well as for the West African nation’s “worsening security situation,” spokesman Stephane Dujarric said in a statement.

“The Secretary-General strongly condemns any attempt to take over a government by the force of arms. He calls on the coup leaders to lay down their arms and to ensure the protection of the physical integrity of the President and of the institutions of Burkina Faso,” he said.

“The Secretary-General calls on all actors to exercise restraint and opt for dialogue. The United Nations reiterates its full commitment to the preservation of the constitutional order and reaffirms its support to the people of Burkina Faso in their efforts to find solutions to the multifaceted challenges facing the country,” he added.

Col. Paul Henri Sandaogo Damiba went on live television with other members of the junta, which called itself the Patriotic Movement for Safeguard and Restoration, saying they decided to “put an end to the power” of Kabore due to the “continuous deterioration of the security situation.”

The officers also accused Kabore’s administration of being unable to unite the country to “effectively face the situation,” and claimed this led to “exasperation of the nation’s various social strata.”

In addition to closing the country’s borders, the junta suspended Burkina Faso’s constitution, and dissolved the government and parliament.

According to security sources and multiple media reports, Kabore was detained after gunfire was heard in military barracks in the capital Ouagadougou on Sunday.

The internet remains largely cut across Burkina Faso, according to NetBlocks, an internet blockage observatory.

Gender parity out of reach for 100 years: Report