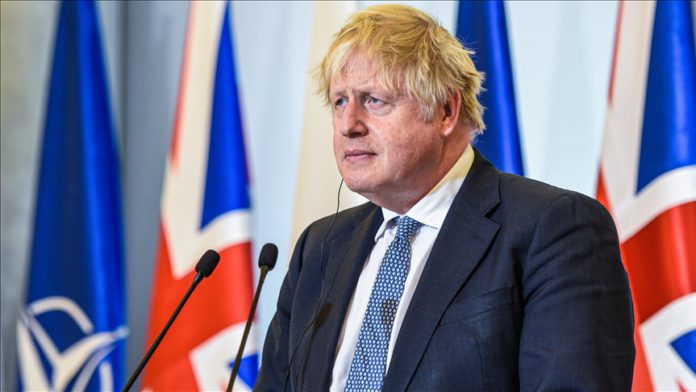 If Russia invades Ukraine, “shockwaves will be heard around the world,” British Prime Minister Boris Johnson told world leaders in a stark warning at the Munich Security Conference on Saturday.

“This is a very dangerous moment in our history. We stand on the brink of what could be a war in Europe,” Johnson said.

He said that everyone at the three-day conference – dozens of heads of state and government, but with Russia notably absent – stands united in support and solidarity with Ukraine.

“If Ukraine is invaded and if Ukraine is overwhelmed, we will witness the destruction of a democratic state, a country that has been free for a generation, with a proud history of elections,” Johnson said.

He added that Western claims of support for Ukraine would be “hollow, meaningless and insulting” if it looks away in the event of a Russian invasion.

“The risk now is that people would draw the conclusion that aggression pays and that ‘might is right’,” he said, adding that the West should not underestimate the “gravity of this moment.”

Turning his attention to how the West would react if Russia does invade Ukraine, Johnson said they would “sanction Russian individuals, and companies of strategic importance to the Russian state and we will make it impossible for them to raise finance on the London capital markets.”

He continued by saying that Britain would “open up the Matryoshka dolls of Russian-owned companies and Russian-owned entities to find the ultimate beneficiaries within.”

“We cannot allow European countries to be blackmailed by Russia, we cannot allow the threat of Russian aggression to change the security infrastructure of Europe. We cannot permit a new Yalta, a new division of our continent into spheres of influence,” Johnson said, referring to the post-World War II meeting of the US, British, and Soviet leaders – held on the Crimean Peninsula, a territory Russian invaded in 2014.

‘Cascade of false claims’ as prelude to war

He added that the West “must now wean ourselves off dependence on Putin’s oil and gas,” and that they could not ignore the lessons of state energy giant Gazprom’s “obvious manipulation of European gas supply.”

Looking ahead to possible Russian actions against Ukraine, Johnson said: “We now need to prepare ourselves for the Russian playbook of deception that governs every operation of this kind.”

He warned that there was a “cascade of false claims” about Ukraine with the aim of sowing confusion “almost for its own sake.” These include Russia planning staged events to spin “a web of falsehoods designed to present any Russian attack as a response to provocation.”

On the consequences of a Russian invasion, Johnson said: “If Ukraine is invaded, those shockwaves will be heard around the world. They will be heard in East Asia, in Taiwan.

“When I spoke to the prime ministers of Japan and Australia, they left me in no doubt the economic and political shock will be felt on the far side of the world.”

“If Ukraine is overwhelmed, overrun by brute force, I fail to see how a country encompassing nearly a quarter-of-a-million square miles – the biggest nation in Europe apart from Russia itself – could then be held down and subjugated forever after a generation of freedom,” he said.

“We are now staring at a generation of bloodshed, and misery,” Johnson said.

“I believe that Russia would have absolutely nothing to gain from this catastrophic venture, and everything to lose.

“And while there is still time, I urge the Kremlin to de-escalate, to disengage its forces from the frontier and to renew our dialogue.”

Ukrainian President Volodymyr Zelensky tweeted on Saturday: “Met with Boris Johnson in Munich. Talked about security against the background of Russia’s aggressive actions. Agreed on joint next steps. We remain united in the pursuit of de-escalation through diplomacy. Grateful to Britain for supporting Ukraine and cooperation for security and peace.”