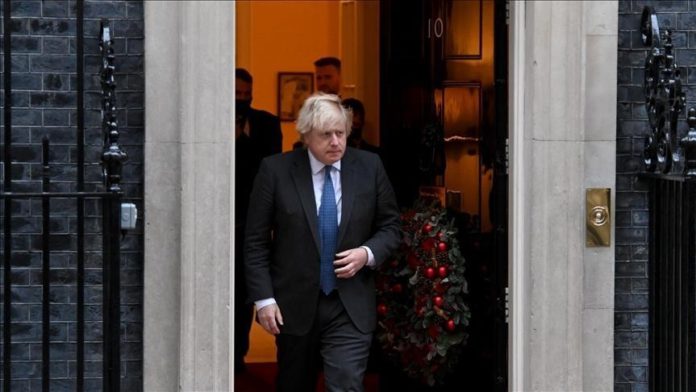 British Prime Minister Boris Johnson, battered from days of criticism for parties held at Downing Street during COVID-19 lockdowns, on Tuesday once again apologized to the queen and the nation.

In his first public appearance since a Daily Telegraph report that two drinking parties were held at Downing Street the night before the funeral last year of Prince Philip, the queen’s husband, Johnson repeated his apology during an interview with Sky News political editor Beth Rigby.

“Was having to apologize to the queen about those parties, the night before she put her husband over 70 years, she laid him to rest, was that a moment of shame for you?” Johnson was asked.

Johnson said he “deeply and bitterly regret that that happened.”

“And I can only really renew my apologies both to her majesty and to the country for misjudgments that were made and for which I take full responsibility.”

Also asked if he could “recover from this” as “the public think you should go, your MPs (are) in revolt, six of them have publicly said you should resign,” Johnson expressed sympathy but deflected the question.

“I understand people’s feelings, and I understand why people feel as strongly as they do,” he said.

“I repeat my apologies for what happened and I am heartily, heartily sorry for misjudgments that were made in number 10.”

“What I do need to do is to wait for the conclusion of the inquiry,” Johnson added.

Johnson has been under fire due to an illegal lockdown party he attended with around 40 Downing Street staff in May 2020.

Various media reports suggest that more than 15 parties were held during the lockdown, at a time people were asked not to visit or be with their loved ones to curb the coronavirus pandemic.

Johnson previously apologized for attending one of the events in a statement at the House of Commons, but nationwide anger has prompted more than 50% of the public to demand his resignation, according to a poll.