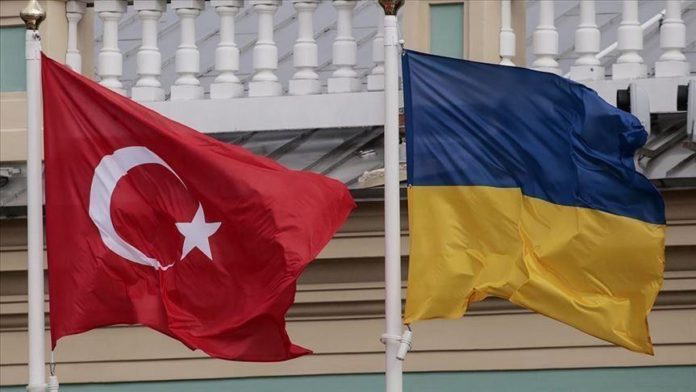 Ukrainian scholar Ahatanhel Krymsky, also known for his studies on Turkology, was commemorated at a conference in the Turkish capital of Ankara on Wednesday.

The event, held at the Ulucanlar Prison Museum, was jointly organized by Ukraine’s embassy in Ankara, TURKSOY, and EKO Eurasia Association on the occasion of his 150th birthday.

Krymsky (1871-1942) was an eminent orientalist and Ukrainian philologist who laid the foundation of many institutes on oriental studies, including the Ukrainian Academy of Sciences.

Speaking at the conference, Ukraine’s Ambassador to Turkey Andrii Sybiha said Krymsky has left an unforgettable trace in history.

“Besides being a leading orientalist and Turcolog, Krymsky has presented us with an incredible wealth of ideas about the Turkic world,” he said.

Sybiha also brought a book of Krymsky on Crimea, saying he was an expert on the peninsula.

The ambassador added that they have requested the Ankara municipality to name a street after Krymsky.

The head of the Turkish Language Association also addressed the meeting and said they are working on the Ukrainian-Turkish dictionary, which will be published soon.

Prof. Hulya Kasapoglu Cengel of Ankara Haci Bayram Veli University, who has been researching on Krymsky, said choosing the prison museum for the program is so meaningful as the Ukrainian scholar lost his life at the age of 71 in a prison in Kostanay, Kazakhstan.

She said Krymsky was the victim of political repression during the Soviet era and was declared “the enemy of the public” just for studying Turkology.

Sharing biographical details, Cengel said his father was a Crimean, and after early education in Ukraine, Krymsky studied history and philology at Moscow University from 1896-1898.

Krymsky also went to Lebanon to learn Arabic, and knew 16 languages including Turkic and Slavic languages, she said, adding that he taught at the Arabic Philology Department of the Lazarev Institute of Oriental Languages in Moscow, and later became a professor.