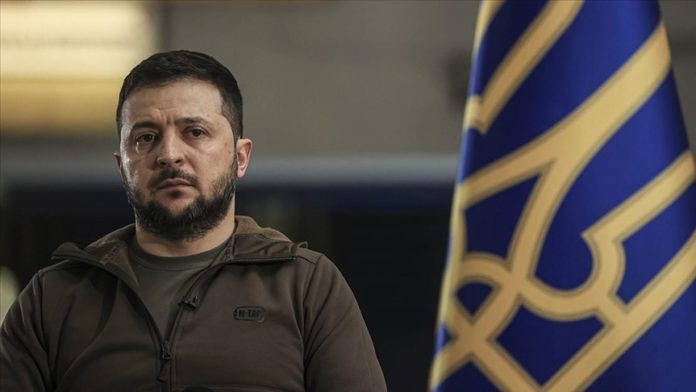 In a country still wracked by war, Ukraine’s president on Wednesday marked the 78th anniversary of the 1944 exile of Crimean Tatars from their homeland.

“In 1944, expelling the Crimean Tatars from their land, the then-torturers were convinced that none of the displaced would return home, to Crimea,” said Volodymyr Zelenskyy in an address to the nation, referring to a peninsula occupied by Russia since 2014, in what many call a prelude to the current war.

He continued: “Now, trying to occupy Ukraine and destroy our lives, the current torturers of the people were also convinced that everything would work out for them and that we would not be able to endure it. And we endured. And we are struggling to bring life back to every corner of our home. And we are coming back.”

On May 18, 1944, Soviet authorities began the forced deportation of the indigenous people of Crimea, the Crimean Tatars, from their homeland, said Zelenskyy, adding that after the “terrible war” at that time in Crimea, as well as throughout Ukraine and Europe, people were “put on the brink of survival.”

Zelenskyy said the Soviet authorities wanted to deprive the Crimean Tatar people of their homeland and lives, “erase” their history and name, but the people who managed “to return home” also managed to “preserve themselves and the truth.”

During and after the deportation, when the Crimean Tatar people were forced to live abroad, almost half of them died, he said, calling this a “deliberate crime of tyranny” against the people and humanity.

“Today we turn again to what was experienced then. And we are doing this in conditions when the descendants of that tyranny are not only trying to deprive Crimean Tatars of their home for the second time – since 2014. They also want to take away the home of the entire multi-million Ukrainian people – all who live on our land,” he said.

Referring to Russia’s ongoing war on Ukraine, which it launched on Feb. 24, Zelenskyy underlined that currently “significant territories” remain under the occupation of Russian forces.

“And again, like 78 years ago, they are forcibly deporting hundreds of thousands of our people abroad to remote areas,” he said.

Zelenskyy stressed that Russia’s war on Ukraine “raises from ashes the experience of that time” but also encourages Ukraine to defeat “the occupiers.”

“Eternal memory to all victims of the genocide of the Crimean Tatar people!” he said.

The Crimean Tatars, ethnically a Turkic group, were deported to various regions within the Soviet territories, in particular Siberia and Uzbekistan. Almost half of the exiles, who endured long months of dire living conditions, are thought to have died of starvation and disease.

Since the 2014 Russian invasion, Crimea’s ethnic Tartars have faced a “systematic oppression and intimidation campaign,” in the words of the Turkish Foreign Ministry, including the banning of their representative body the Mejlis, raids on homes and mass detentions, and suppression of the right to assembly and protest as well as freedom of expression.