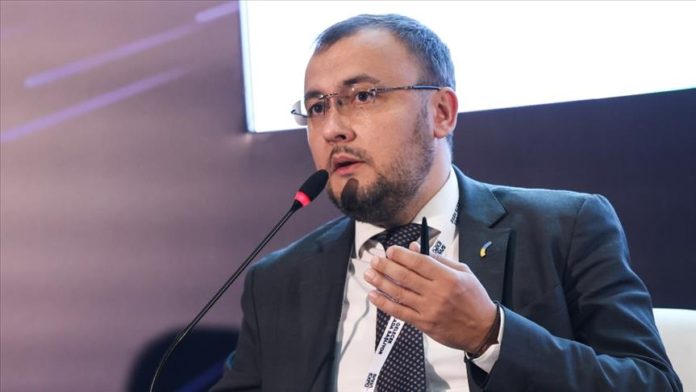 Amid criticism of Germany’s cautious policy towards Russia, Ukraine’s ambassador to Turkiye on Monday said this policy needs to be “reconsidered.”

Speaking to Anadolu Agency, Vasyl Bodnar pointed to the close cooperation between his country and Germany, adding that they “do not understand (Berlin’s) behavior.”

Bodnar’s remarks came after Germany’s navy chief had to resign after controversial comments on Ukraine.

Over the weekend, Vice Adm. Kai-Achim Schoenbach said Russia has no intention of invading Ukraine, and that Russian President Vladimir Putin deserves respect.

Facing international criticism and a strong protest from Kyiv, the German Defense Ministry announced late Saturday that Schoenbach had stepped down.

Bodnar said Ukraine is “working closely with Germany on hospitals, support of military medicine, on implementation of some projects in Ukraine, supporting reforms.”

“So objectively speaking, we do not understand their behavior,” he said, adding that if Berlin “would like to prevent a war and to strengthen Ukraine’s defense capabilities,” then it should change its policy on Ukraine, which he said was “adopted from the previous administration.”

Revising the policy would be a “much more logical and understandable” move, said Bodnar.

“Otherwise, we don’t know who can then stop Russian tanks,” he added.

We see these tanks every day

Saying that the current situation between Ukraine and Russia may seem like “some computer game,” Bodnar explained: “But for us, it’s reality.”

Referring to the illegal 2014 annexation of Crimea and the battle against Russian-backed separatists in Donbas, as well as Moscow’s current buildup at the border, he said: “We are in the eighth year of the war. And we, our soldiers, have been seeing these tanks and military equipment almost every day.”

Criticizing Berlin’s opposition to sending weapons to Ukraine, the envoy stressed that Russia’s military buildup is “a real threat and we need defense weapons.”

Germany has argued sending weapons to Ukraine would escalate military tensions and undermine efforts to find a diplomatic solution to the conflict.

He stressed that if Germany continues to say “okay, Russia is not an enemy. Let’s try to talk to them,” then such a decision needs to be “reconsidered, then there will be unanimity within NATO and solidarity with Ukraine.”

Saying that such unanimity is not only necessary for Ukraine but also for NATO, Bodnar added that “the next target, if something happened, will be Poland, Lithuania, Estonia, or Latvia, or even Germany. Because it is not so far.”

Germany remains reluctant to block the Russian-backed Nord Stream 2 gas pipeline, despite repeated calls from the US and NATO’s eastern members to take a harsher stance towards Russia.

Bodnar said Russia uses the Nord Stream 2 gas pipeline as a “precondition for bringing more Russian military warships into the Baltic Sea.” Saying that such a move “poses a potential threat,” the Ukrainian envoy said Russia’s move in the Baltic Sea could lead to “other military activities.”

Russia recently amassed tens of thousands of troops near Ukraine’s borders, prompting fears that Kremlin could be planning another military offensive against its ex-Soviet neighbor.

Moscow has denied it is preparing to invade and said its troops are there for exercises. Instead it has issued a list of security demands, including Ukraine not joining NATO, to calm the existing tensions.

US, French envoys to Beirut in Saudi Arabia to discuss Lebanon...