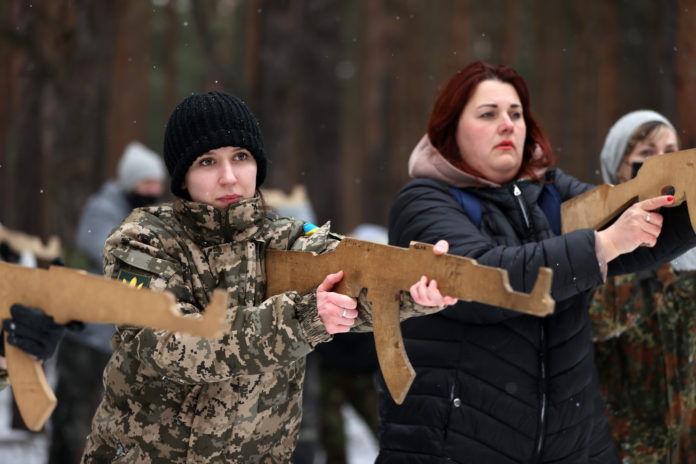 Ukraine’s reservist officers under the “territorial defense” structure hold weekly military and other training for civilians in preparation for any possible hitches amid an escalation of tensions.

The latest training on Saturday in the capital Kyiv had more than 100 civilians, military personnel, and reservists.

As part of the mass recruitment for the volunteer army, the training was conducted by the Ukrainian Legion — a body that organizes military training for the civilian population — together with the Desnianskyi district Territorial Defense Battalion, the Kyiv Defense Headquarters, and the Total Resistance initiative with the support of the district state administration.

Ukraine’s territorial defense is a system of national, military, and special measures carried out across the country in peacetime to prepare the nation to counter any possible military threats.

According to the national resistance act that took effect Jan. 1, the permanent number of the Territorial Defense Forces in peacetime will be 10,000 career personnel, with an additional 120,000 civilian reservists to be recruited and trained.

So, in case of army mobilization, the volunteer army will consist of more than 130,000 people, including reservists.

The main part of volunteer formations includes those who served in the ranks of the Armed Forces of Ukraine or in other military formations and law enforcement agencies, while those who have more than two convictions, as well as those who do not meet the selection criteria, are being denied to enter voluntary formations.

The Territorial Defense Forces of Ukraine will reportedly have more than 20 brigades, one per region, which will unite over 150 battalions.

To be enrolled into the ranks of the Territorial Defense Forces, the volunteers need to go through certain training, including basic military training, medical training, and first-aid, while they should also pass the professional and psychological selection and sign a volunteer contract.

Moscow has denied it is preparing to invade, saying its troops are there for exercises.

Andriy Rikun, an official representative of the Kyiv Defense Headquarters, told Anadolu Agency that training is held to “unite everyone” — the people of the region, the whole public, and those who will be protecting the region in case of any negative development in the situation.

“They are getting prepared to repulse the enemy at the right time (when it’s needed),” he said.

Rikun said that with the training, people also learn how to evacuate in emergency situations, how to provide first-aid, and to “protect (their) own families.”

“Our training includes (military) tactics, use of weapons, first-aid, (preparing) emergency bags, knife fighting, evacuation, and survival, a full range of what can be useful to a person in case of war and technological disaster,” he asserted.

Rikun noted that the last training was held last spring, adding that for the past eight years since the start of the Russian-Ukrainian conflict in 2014, the training has been ongoing.

“We have not stopped and are not going to stop. The training is only for those who want to join it,” he added.

‘Should always be ready’

Anastasia Sakva, a 21-year-old volunteer, said she is attending for the first time but noted that before the training, she was a member of the Ukrainian Legion and other similar organizations.

“I like that there are several locations (for training) and that people do not run in large groups, and this is convenient for receiving and processing information well,” she said.

Savka also stressed the importance of “getting together” more often for better results.

“Even if we are not part of the Armed Forces or other formations, one cannot hope that he can learn this (military training) in a week or a month in different training centers in case of an escalation, as was the case in 2014 when no one was ready. Therefore, I believe that we should always be ready and train in civilian life,” she said.

Sergiy Fomenih, a 54-year-old volunteer and army reservist, said he joined the “movement” in 2016.

“The main aim is to train the nation to avoid panic in case of a war situation declaration, so that everyone knows what to do, how to do and where to go. Also, to know at least how to handle a weapon in hands, know how to use the weapon,” he said.

The “final formation” of the volunteer army will be done by the autumn, and will include nearly half a million people, he said. “Thanks a lot to the friendly Turkiye for its help. This is a brotherly nation. We are ready to maintain close cooperation.”

Fomenih highlighted that the recent official visit by Turkish President Recep Tayyip Erdogan to Kyiv was “a very good step by Turkiye toward Ukraine.”

“I positively assess (Turkiye’s role in mediation between Kyiv and Moscow), and think that, of course, if possible, it is necessary to resolve the conflict peacefully, but if there is a confrontation, then we can stand up for ourselves,” he said.

Erdogan has on many occasions voiced that Turkiye is ready to host a summit of Russian and Ukrainian leaders to defuse ongoing tensions.

Nadejda, a 38-year-old resident of Kyiv, said this is the second batch of “very useful” regional training held in the capital city.

“People have very poor awareness about the territorial defense, (like) what should be done, where (they) should go, how to act in case of any serious situations. … Because of this, I think that each region should organize either on its own base, or on the base of other regions, such kind of territorial defense training,” she said.

Noting that she was not able to attend previous training in Kyiv, Nadejda said she came this time to see “how it happens.”

She summed up her thoughts by saying: “These trainings are definitely important. And the more people are involved in this training, the better it is. I think that it is important not to panic, but to get prepared.”